Why Rush is Wrong — David Frum, the conservative speechwriter who gave the world “the axis of evil” during the recent Bush administration, begs to differ with his fellow Republicans and their new party leader, and has taken a great deal of heat for his apostasy.

Every day, Rush Limbaugh reassures millions of core Republican voters that no change is needed: if people don’t appreciate what we are saying, then say it louder. Isn’t that what happened in 1994? Certainly this is a good approach for Rush himself. He claims 20 million listeners per week, and that suffices to make him a very wealthy man. And if another 100 million people cannot stand him, what does he care? What can they do to him other than … not listen? It’s not as if they can vote against him.

Decisions that will haunt American taxpayers for generations have been made with hardly a debate. The federal government will pay more of the cost for Medicaid, it will expand the SCHIP program for young children, it will borrow trillions of dollars to expand the national debt to levels unseen since WWII. To stem this onrush of disastrous improvisations, conservatives need every resource of mind and heart, every good argument, every creative alternative and every bit of compassionate sympathy for the distress that is pushing Americans in the wrong direction. Instead we are accepting the leadership of a man with an ego-driven agenda of his own, who looms largest when his causes fare worst.

In the days since I stumbled into this controversy, I’ve received a great deal of e-mail. (Most of it on days when Levin or Hannity or Hugh Hewitt or Limbaugh himself has had something especially disobliging to say about me.) Most of these e-mails say some version of the same thing: if you don’t agree with Rush, quit calling yourself a conservative and get out of the Republican Party. There’s the perfect culmination of the outlook Rush Limbaugh has taught his fans and followers: we want to transform the party of Lincoln, Eisenhower and Reagan into a party of unanimous dittoheads—and we don’t care how much the party has to shrink to do it. That’s not the language of politics. It’s the language of a cult.

I’m a pretty conservative guy. On most issues, I doubt Limbaugh and I even disagree very much. But the issues on which we do disagree are maybe the most important to the future of the conservative movement and the Republican Party: Should conservatives be trying to provoke or persuade? To narrow our coalition or enlarge it? To enflame or govern? And finally (and above all): to profit—or to serve?

Frank Rich — Art reassures life in the form of Our Town.

“Wherever you come near the human race, there’s layers and layers of nonsense,” says the Stage Manager in Thornton Wilder’s “Our Town.” Those words were first heard by New York audiences in February 1938, as America continued to reel from hard times. The Times’s front page told of 100,000 auto workers protesting layoffs in Detroit and of a Republican official attacking the New Deal as “fascist.” Though no one was buying cars, F.D.R. had the gall to endorse a mammoth transcontinental highway construction program to put men back to work.

In the 71 years since, Wilder’s drama has become a permanent yet often dormant fixture in our culture, like the breakfront that’s been in the dining room so long you stopped noticing its contents. Requiring no scenery and many players, “Our Town” is the perennial go-to “High School Play.” But according to A. Tappan Wilder, the playwright’s nephew and literary executor, professional productions have doubled since 2005, including two separate hit revivals newly opened in Chicago and New York.

You can see why there’s a spike in the “Our Town” market. Once again its astringent distillation of life and death in the fictional early-20th-century town of Grover’s Corners, N.H., is desperately needed to help strip away “layers and layers of nonsense” so Americans can remember who we are — and how lost we got in the boom before our bust.

At the director David Cromer’s shattering rendition of the play now running in Greenwich Village, it’s impossible not to be moved by that Act III passage where the Stage Manager comes upon the graves of Civil War veterans in the town cemetery. “New Hampshire boys,” he says, “had a notion that the Union ought to be kept together, though they’d never seen more than 50 miles of it themselves. All they knew was the name, friends — the United States of America. The United States of America. And they went and died about it.”

Wilder was not a nostalgic, sentimental or jingoistic writer. Grover’s Corners isn’t populated by saints but by regular people, some frivolous and some ignorant and at least one suicidal. But when the narrator evokes a common national good and purpose — unfurling our country’s full name in the rhetorical manner also favored by our current president — you feel the graveyard’s chill wind. It’s a trace memory of an American faith we soiled and buried with all our own nonsense in the first decade of our new century.

No School Left Behind — One Miami high school that was on the brink of failure is fighting to make the grade. 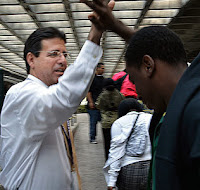 The school bell peals. Doors fling open and a thousand teenagers spill into the halls.

”You know the rules, people,” a man bellows through a bullhorn. ”No headphones. No hats. Get your ID badges out and get moving!”

Students have six minutes to crisscross the sprawling two-block campus. When the bell rings a second time, classroom doors shut and the halls are strangely quiet.

Loitering is not an option.

There’s too much at stake.

Miami Central — a high school historically beset by chronic truancy, declining enrollment, dispirited staff and general disrepair — is fighting to avoid a grim distinction. It could become the first school in the state to face a federally mandated overhaul because of repeated failures on the Florida Comprehensive Assessment Test.

Over the past five years, the school has received five consecutive F grades. One more, and Superintendent Alberto Carvalho will be forced to make radical changes under a new federal mandate.

That could mean stripping the curriculum down to its bare bones — cutting art, music and electives — and replacing dozens of teachers and administrators, including the principal.

Carvalho could even shut down the 50-year-old school.

Enter Doug Rodriguez, the state’s No. 1 principal, now at the helm of the school with the state’s worst academic record.

Rodriguez, a 20-year veteran of the school system, left a coveted job at a top high school on a mission to shake things up at Central.

In a two-month flurry, he cleaned up the halls, shipped dozens of troubled students to alternative schools, designated a dean of discipline, appointed as many as four teachers to the same classroom and boosted morale.

And when The Miami Herald sought to chronicle Central’s efforts to meet the challenge, Rodriguez and Carvalho agreed, giving a reporter and photographers unfettered access.

”Things are changing around here,” said Shelby LaBeach, 18, a senior who is Miss Miami Central, the official student ambassador. ”We have our own Obama.”

Into Training — Andy Isaacson of the New York Times travels across the country on Amtrak.

SOMEWHERE on the west side of Illinois, the Amish men broke out a deck of Skip-Bo cards and I joined them as the cafe car attendant, using an iPod and a set of portable speakers, broadcast Eckhart Tolle, author of “A New Earth,” discoursing on the virtues of stillness.

“Life gets discombobulating,” the attendant said, calmly. “This helps.”

On both sides of the train window, American scenery unfolded. A dirty layer of ice and snow subdued the still cropland to the distant horizon. At the next table a woman stuck her nose in a novel; a college kid pecked at a laptop. Overlaying all this, a soundtrack: choo-k-choo-k-choo-k-choo-k-choo-k — the metronomic rhythm of an Amtrak train rolling down the line to California, a sound that called to mind an old camera reel moving frames of images along a linear track, telling a story.

The six Amish men were in their mid-20s, and they were returning home to Kolona, Iowa, after a three-week cross-country tour. They had especially liked the Creation Museum, in Petersburg, Ky., and Niagara Falls. As we rolled across white plains, they pointed out which plots grew beans and which grew corn. To my eye, the dormant land revealed few clues.

Around the train car lounged Americans traveling for work and others for family, people for whom train travel is a necessity and those for whom it’s merely quaint, first-time riders and probably even a few “foamers” — the nickname that train workers privately give the buffs who salivate over the sight of a locomotive.

I had ridden long-distance trains in India and China but never across my own country. I suppose that after two years of receiving images saturated in red, white and blue from all corners of the nation, I wanted to make my own. The fading glow of the Inauguration, I thought — a moment for national unity and new beginning, both imagined and real — would be a good light in which to meet the country again. And it was winter, after all; I didn’t feel like driving.

With every uptick in gas prices, Americans in general are thinking less about driving. With each degree of global warming, trains become even more sensible. And with each new surcharge and each new item of clothing one is required to remove to board an airplane — and with every small-town commercial airport and cabin amenity that vanishes forever — the rails beckon. Last year, Amtrak set all-time ridership records.

Traveling cross-country by train takes time, but less than I expected: within four days, one crosses the Hudson River and reaches San Francisco Bay at Emeryville, Calif. I gave myself a week, stopping in Chicago, Denver and, for variety, a remote town in Nevada that had a nice ring to its name.