Full Days — The life inside the White House bubble for a man who is new to the confinement. 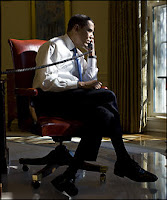 Each morning when he arrives at the Oval Office, President Obama asks his staff to deliver him a package containing 10 letters. It is a mere sampling of the 40,000 or so that Americans send to the White House every day — a barrage of advice from students and teachers, small-business owners and the unemployed. In between his daily meetings with senior staff members and Cabinet secretaries, Obama has made a habit of sitting alone behind his desk and reading one letter at a time, friends and advisers said. The exercise is intended to help keep him grounded, but it also provides Obama with a glimpse beyond the White House walls and the Secret Service perimeter into what the president sometimes refers to as “the real world.”

Obama has learned during his first 40 days in the White House that he must fight to preserve such direct connections to the citizens he leads. Obama’s life as president is outsourced to about 25 assistants, 25 deputy assistants and 50 special assistants who act as a massive siphon to control the information that reaches his desk and schedule the meetings and public appearances that shape his days. A correspondence staff sorts through his mail and selects the 10 letters that he reads. Three calligraphers write his invitations and thank-you notes. Two “body men” follow him in lockstep to carry his jacket, supply his ChapStick and place his telephone calls.

The same culture of delegation has governed life in the White House for decades, but Obama’s popularity has heightened the need for so many gatekeepers. As the country’s first African American president, he receives an unprecedented number of requests for autographs, interviews, photographs and speeches, aides said, and less than one request in every thousand merits Obama’s attention.

Friends and advisers said Obama has chafed at some aspects of his presidential existence. He campaigned tirelessly for 18 months to reach the White House, but, finally there, he seems eager to escape its smothering confines. Obama has asked his advisers to schedule at least one campaign-style trip out of Washington each week, and he has fled the White House to eat meals out, visit Camp David in Maryland and spend a weekend with old friends in Chicago. On Friday night, he sat courtside at Verizon Center and watched the Wizards trounce his hometown Bulls. One afternoon last month, Obama and his wife, Michelle, visited wiggly second-graders at a local public school because, Obama explained, “we were just tired of being in the White House.” The first lady chimed in: “We got out! They let us out!”

Frank Rich — Catch-22 for the president.

The good news for Obama is that he needn’t worry about the Republicans. They’re committing suicide. The morning-after conservative rationalization of Jindal’s flop was that his adenoidal delivery, not his words, did him in, and that media coaching could banish his resemblance to Kenneth the Page of “30 Rock.” That’s denial. For Jindal no less than Obama, form followed content.

The Louisiana governor, alternately smug and jejune, articulated precisely the ideology — those G.O.P. “policies” in the Times/CBS poll — that Americans reject: the conviction that government is useless and has no role in an emergency. Given that the most mismanaged federal operation in modern memory was inflicted by a Republican White House on Jindal’s own state, you’d think he’d change the subject altogether.

But like all zealots, Jindal is oblivious to how nonzealots see him. Pleading “principle,” he has actually turned down some $100 million in stimulus money for Louisiana. And, as he proudly explained on “Meet the Press” last weekend, he can’t wait to be judged on “the results” of his heroic frugality.

Good luck with that. He’s rejecting aid for a state that ranks fourth in children living below the poverty line and 46th in high school graduation rates, while struggling with a projected budget shortfall of more than $1.7 billion.

If you’re baffled why the G.O.P. would thrust Jindal into prime time, the answer is desperation. Eager to update its image without changing its antediluvian (or antebellum) substance, the party is trying to lock down its white country-club blowhards. The only other nonwhite face on tap, alas, is the unguided missile Michael Steele, its new national chairman. Steele has of late been busy promising to revive his party with an “off-the-hook” hip-hop P.R. campaign, presumably with the perennially tan House leader John Boehner leading the posse.

But that good news for Obama is countered by the bad. The genuine populist rage in the country — aimed at greedy C.E.O.’s, not at the busted homeowners mocked as “losers” by Santelli — cannot be ignored or finessed. Though Obama was crystal clear on Tuesday that there can be “no real recovery unless we clean up the credit crisis,” it was telling that he got fuzzy when he came to what he might do about it. He waited two days to drop that shoe in his budget: a potential $750 billion in banking “asset purchases” on top of the previous $700 billion bailout.

Therein lies the Catch-22 that could bring the recovery down. As Obama said, we can’t move forward without a functioning financial system. But voters of both parties will demand that their congressmen reject another costly rescue of it. Americans still don’t understand why many Wall Street malefactors remain in place or why the administration’s dithering banking policy lacks the boldness and clarity of Obama’s rhetoric.

He’s in the Army Now — The economy has grandfathers joining up.

As the South Florida real estate market disintegrated and the number of jobless rose, 40-year-old Jorge Gil Muela made a young man’s decision.

The five-foot-seven, 235-pound property appraiser walked into a recruiting center in a Kendall strip mall in December to join the Army. He was told to shed 50 pounds. It’s a small price, he said, for the job security and pay, family health insurance and new career as a cargo handler.

A 185-pound Muela will report for duty at Fort Sill, Okla., next month, leaving his wife, children and grandchildren behind in Miami.

”It’s the only answer for me to secure our way of life right now,” he said soberly, noting that the 21st century GI bill means that he can pass college benefits along to his 18-year-old son.

Muela’s tale shows how the financial crisis may be subtly aiding the Army, which struggled to meet its recruitment goals in 2004 and 2005.

Analysts anticipate that these hard times may help build a more mature, discerning Army less reliant on bonuses and waivers for would-be soldiers with health issues or criminal records.

”Since the economy has gone into the tanks, the recruiting environment has gotten a lot better,” says Andrew F. Krepinevich Jr., president of the Center for Strategic and Budgetary Assessments, a Washington policy research group.

President Barack Obama even made a pitch of sorts for military service in his speech to Congress last Tuesday. He pledged pay raises and better veterans benefits and announced plans to grow the Army and Marines, which together make up about half of the 1.4-million-member active U.S. military.

Military life is not a viable midlife career change for everybody. But Staff Sgt. Javier Rabell, who recruited Muela, says he has handled three 40-something Army enlistments in recent months. The two other men were moving from the Navy Reserve to the Army for the possibility of promotions that came with raises, healthcare and a GI bill that lets them pass college tuition along to their children.