Rush Limbaugh sides with the pirates. 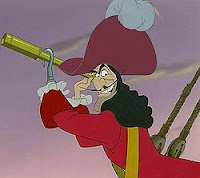 They were kids. The story is out, I don’t know if it’s true or not, but apparently the hijackers, these kids, the merchant marine organizers, Muslim kids, were upset, they wanted to just give the captain back and head home because they were running out of food, they were running out of fuel, they were surrounded by all these US Navy ships, big ships, and they just wanted out of there. That’s the story, but then when one of them put a gun to the back of the captain, Mr. Phillips, then bam, bam, bam. There you have it, and three teenagers shot on the high seas at the order of President Obama.

I don’t know about you, but I can picture Mr. Limbaugh with an eye-patch, a hook, and parrot-crap on his shoulder.