Another one of the Golden Girls has left us. 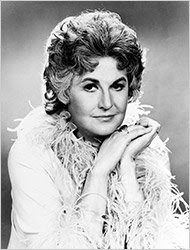 Beatrice Arthur, the tall, deep-voiced actress whose razor-sharp delivery of comedy lines made her a TV star in the hit shows ”Maude” and ”The Golden Girls” and who won a Tony Award for the musical ”Mame,” died Saturday. She was 86.

Arthur died peacefully at her Los Angeles home with her family at her side, family spokesman Dan Watt said. She had cancer, Watt said, declining to give further details.

”She was a brilliant and witty woman,” said Watt, who was Arthur’s personal assistant for six years. ”Bea will always have a special place in my heart.”

Arthur first appeared in the landmark comedy series ”All in the Family” as Edith Bunker’s loudly outspoken, liberal cousin, Maude Finley. She proved a perfect foil for blue-collar bigot Archie Bunker (Carroll O’Connor), and their blistering exchanges were so entertaining that producer Norman Lear fashioned Arthur’s own series.

I saw her in Mame in 1967 and loved her then as Vera Charles, the boozy and acid-tongue best friend who stole the show with her “Bosom Buddies” duet with Angela Lansbury. I’m glad the younger generations loved her as Dorothy Zbornak, the powerful and vulnerable divorcee who made feminism a part of prime-time TV with grace and great wit.

Thank you for being a friend.