It’s tough to find a job in this economy. I have a feeling Louis Caldera will be finding that out pretty soon. 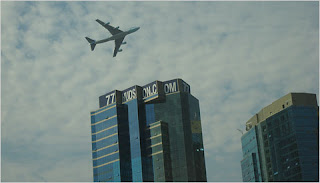 An Air Force One lookalike, the backup plane for the one regularly used by the president, flew low over parts of New York and New Jersey on Monday morning, accompanied by two F-16 fighters, so Air Force photographers could take pictures high above the New York harbor.

But the exercise — conducted without any notification to the public — caused momentary panic in some quarters and led to the evacuation of several buildings in Lower Manhattan and Jersey City. By the afternoon, the situation had turned into a political fuse box, with Mayor Michael R. Bloomberg saying that he was “furious” that he had not been told in advance about the flyover.

At 4:39 p.m. Monday, the White House issued an apology for the flyover. Louis E. Caldera, director of the White House Military Office, who served in the Clinton administration as secretary of the Army, said in a statement:

The mission on Monday, officials said, was set up to create an iconic shot of Air Force One, similar to one that was taken in recent years over the Grand Canyon.

Wow, what an idiot.