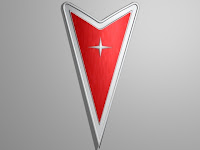 GM Chief Executive Officer Fritz Henderson said the Pontiac brand would be closed by 2010, calling it an “extremely personal decision.” In addition to speeding up decisions on Saturn, Saab and Hummer, GM will be left with four brands – Chevrolet, Buick, GMC and Cadillac.

The corporation is also planning to cut 21,000 jobs and get rid of 2,600 dealers in that time frame. This is all a part of their reorganization plan to stave off bankruptcy, which could conceivably still happen.

So my faithful 1988 Pontiac 6000 LE station wagon in the garage is an orphan. I can’t say I’m surprised; GM has really been unsure of what to do with the division for the last ten years or so, trying different ways of redefining it in the marketplace since it got out of the muscle car (“We build excitement”) niche and foisting things like the Aztek on an unsuspecting and resentful public. I suppose it had to happen, and while I’m sorry to see the brand go, 83 years is a good long run. My only regret is that true to the corporate mentality, GM did to Pontiac what they did to Oldsmobile in 2001; they slowly starved it to death and then wept over the grave.

Well, no matter what; I still have my Pontiac, and it has a good home.

By the way, lest you think I am being callous about the thousands of people who will be hurt by the loss of the Pontiac brand — the autoworkers at the plants and their families, the parts suppliers, the dealers and the people who work for them — I am all too aware of their situation and have spoken of it before, especially when there were those who were saying that it was fine with them if GM went out of business. I think it goes without saying that the management at General Motors owes the people at PMD and all the people touched by this all of the support they can muster to help them through this. It’s much more than just the loss of a brand; it’s lives and fortunes that will be lost as well, and the company has a duty — both legal and moral — to leave these people and their families and their towns with a sense of dignity and gratitude for the years they put in to make the cars and make the lives they had. There’s more than just a car nameplate being orphaned here.

The Faithful Correspondent reminded me in the comments (using the alias of “Guest”) that we had a 1954 Pontiac station wagon when I was a kid. Here’s a picture of a 1954 Pontiac, although ours was a mint green with dark green trim. 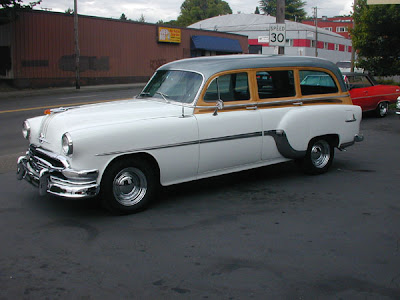 1954 Pontiac
This is from the gallery of Memory Lane Classic Cars in Portland, Oregon. What I remember most about the car was sitting in the front seat and pretending that the circular grille on the radio speaker was the steering wheel.