Testing, Testing — Andres Oppenheimer says in the Miami Herald that the Obama administration may be testing Cuba’s resolve to rectify mistakes and deal with issues like human rights and freedom of the press. 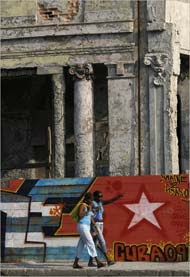 After President Barack Obama’s opening speech at the summit stating that ”the United States seeks a new beginning with Cuba,” several top Latin American and U.S. officials told me — granted, with various degrees of conviction — that there are a few concrete signs that Cuba may accept Obama’s olive branch.

Obama aides are cautiously encouraged by Cuban leader Raúl Castro’s statement Friday in Venezuela that Cuba may have made some ”mistakes” in the past and that ”we are willing to discuss everything,” including human rights, with he U.S. government.

U.S. Deputy National Security Advisor Denis McDonough told me Saturday that ”we are mostly struck by President Castro’s admission that they could be wrong. That strikes me as a degree of candor that we haven’t seen heretofore.” He added, ”But the fact remains that the steps [President Obama] outlined in the last week are steps that he has been talking about for two years, since he wrote an op-ed for The Miami Herald in August 2007.”

The Obama opinion piece called for, among other things, the release of political prisoners in Cuba.

Another senior U.S. official cautioned, however, that ”we are at the very beginning of the search for a new relationship with Cuba, and that’s going to take time. We are going to take a deep breath, go through the summit, get some time to reflect and then think about future steps.”

Direct, assertive and utterly self-assured, Obama has used his broad popularity, a driving ambition and a sweeping agenda to move America in a wholly new direction.

Just shy of 100 days in office, he has ordered the closure of the Guantanamo Bay military prison and a troop withdrawal from Iraq; made it easier for women to sue for job discrimination; eased a ban on stem cell research; extended healthcare coverage to millions of children; ousted the head of General Motors; reached out to the Muslim world; moved to ease tensions with Cuba; traveled to Canada, Europe, Turkey and Latin America; and set aside huge tracts of wilderness for federal protection.

More broadly, Obama has seized on the worst economic crisis since the 1930s — exploiting it, critics say — and set out to reshape major aspects of everyday life: the price we pay to see a doctor, the size of our children’s classrooms, the fuel we put in our cars.

If Obama’s history-making campaign offered hope, the nation’s first black president has delivered audacity; his vision of an activist government has been so vast, Washington now guarantees not only savings accounts but brakes on a Buick.

“You can carp and gripe,” said Allan Lichtman, a historian at Washington’s American University. “But you really have to go back as far as Franklin Roosevelt for this much coming out of a newly elected president.”

Whether dealing with imperious bankers or Somali pirates, Obama as chief executive looks a lot like Obama the candidate: the calmest one at the table, ribbing stressed-out aides and sipping bottled water as his lieutenants guzzle caffeine.

Not that his performance was always so smooth.

After a quick start, a series of controversies slowed hiring for the administration, leaving hundreds of desks vacant and phones unanswered; it took three tries to land a Commerce secretary. Treasury Secretary Timothy F. Geithner, the point man on the economy, relied on holdovers from the Bush administration to shape Obama’s policies, and botched his debut so badly that he helped send markets off a cliff.

For a man who considers himself a good listener, Obama sometimes appeared tone-deaf, underestimating public disgust with a would-be healthcare czar who rode around Washington in a chauffeured Cadillac and failed to pay taxes on the perk. He was slow to detect the populist backlash brewing when tens of millions in taxpayer-funded bonuses went to executives who helped tank the economy.

At times, the nation’s orator in chief struggled to find the right tone — sometimes too grim, sometimes too glib — when talking to a country that needed to hear both hard truths and gentle reassurance. (Last week, Obama gave a speech touting economic improvement the same day lousy consumer spending figures came out.)

When Obama’s agenda threatened to hit a wall inside the Washington Beltway, he took to the road — reporters in tow — to soak up support from friendly, campaign-style crowds.

But more important than personal adulation was something else Americans seemed willing to give their young president, something apparent in robust poll numbers and a recognition that things weren’t going to improve overnight: The country was willing to be patient.

A Big Man Does Beckett — John Goodman takes on the tough role of Pozzo in Waiting for Godot. 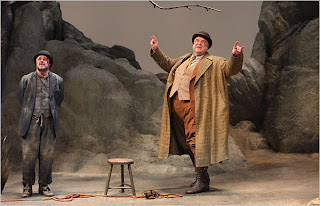 IN his dressing room last week John Goodman stood up, emitted a long, blaring foghorn blast and then announced in a loudspeaker voice, “Now docking. …” He was describing his Act I entrance as Pozzo, his first theatrical role in four years, in the Roundabout Theater Company production of “Waiting for Godot,” which opens April 30 at Studio 54.

John Goodman in his dressing room. He is back onstage for the first time since 2005 in a new production of “Waiting for Godot,” in which he plays Pozzo.

Mr. Goodman is a big man — he’s 6 foot 3, and his weight these days hovers around 300 pounds — and in his Pozzo getup he seems even bigger. He wears a derby, boots and a voluminous riding suit with jodhpurs, and when he comes onstage, at the end of a long rope attached to his hapless slave, Lucky (played by John Glover), he does seem a bit like an ocean liner. Vladimir and Estragon (played by Bill Irwin and Nathan Lane) look astonished, and rightly so.

Pozzo is the least sympathetic and in some ways the trickiest character in “Godot.” He cruelly mistreats Lucky, and yet he is as lost and vulnerable as all the others. He is “an insecure gasbag who needs to be listened to and have things done for him,” as Mr. Goodman put it. “He’s like the Macy’s blimp no one wants to look at.” Pozzo spouts a lot of fustian and hot air, and Mr. Goodman said he was still trying to figure out the right voice for it. His Pozzo speaks in a deep, Goodmanesque rumble but with a lordly British accent.

“It’s just a voice I heard in my head,” Mr. Goodman explained, “along with all the other voices there — the barking dogs and the rest. I need to make it more distinctly American, sort of like Bill Buckley. I’m trying to make it more a patrician Yankee voice, but I worry that’s not going to sell. It’s going to sound like a bad English accent. So it’s something I’m still searching for.”

Mr. Goodman is good at voices. In the course of a hour or so he imitated Peter O’Toole, Joe Franklin, a pretentious critic and an aged horse, complete with snuffling and foot stomping. But there were also sighs, long pauses, Beckett-like silences and moments when Mr. Goodman’s inner critic would cut him off midsentence.

Mr. Goodman, as anyone knows who has seen one of his several “Saturday Night Live” performances, can be a very funny man. His huge face is rubbery and expressive, made for comedy. He moves lightly and is a more than decent blues singer.

Over four decades, appearing in roughly three movies a year, he has played a king, a governor, Babe Ruth and a Stone Age caveman, Fred Flintstone. On “The West Wing” he has been a Republican speaker of the House who temporarily takes over for the president. But as is so often the case with actors his size, he is more often the second banana, the comic foil. His most famous role is Dan Conner, the henpecked husband on “Roseanne.”

In person Mr. Goodman is not the stereotypical jolly fat man. For all his success, he remains full of self-doubt. Compliments make him wince, and his conversational default mode is self-deprecation. He sometimes seems to be eyeing himself with suspicion.

Frank Rich says the “Gathering Storm” ad by the National Organization for Marriage signals a turning point in the demise of the anti-gay movement.

Far from terrifying anyone, “Gathering Storm” has become, unsurprisingly, an Internet camp classic. On YouTube the original video must compete with countless homemade parodies it has inspired since first turning up some 10 days ago. None may top Stephen Colbert’s on Thursday night, in which lightning from “the homo storm” strikes an Arkansas teacher, turning him gay. A “New Jersey pastor” whose church has been “turned into an Abercrombie & Fitch” declares that he likes gay people, “but only as hilarious best friends in TV and movies.”

Yet easy to mock as “Gathering Storm” may be, it nonetheless bookmarks a historic turning point in the demise of America’s anti-gay movement.

What gives the ad its symbolic significance is not just that it’s idiotic but that its release was the only loud protest anywhere in America to the news that same-sex marriage had been legalized in Iowa and Vermont. If it advances any message, it’s mainly that homophobic activism is ever more depopulated and isolated as well as brain-dead.