One hundred years ago today, Robert Peary claimed that he became the first man to reach the North Pole. 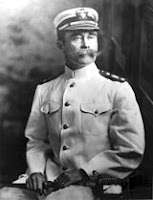 It was, according to his journal, “The prize of 3 centuries, my goal for 20 years.” He had made numerous expeditions in his attempt to reach the Pole and almost got there the year before. But on April 6, 1909, he finally claimed it. It took several weeks for him to get back to civilization and telegraph the news to the world, and only then did he discover that Dr. Frederick A. Cook, a former member of his previous expeditions, was claiming that he had reached the Pole the year before, in the spring of 1908. Since the North Pole is on top of the polar ice cap — essentially a huge ice floe — and the actual point of land that marks it is at the bottom of the Arctic Ocean, there was no way at the time to prove that either man was ever there. In fact, any artifacts buried by Cook or Peary to mark their trip would have been in floating ice which drifted off, or sank when the ice melted.

The dispute between Peary and Cook became a huge battle, especially in the press, and even to this day there are those who think neither man actually got to the North Pole when they said they did. This story is told in a chapter of the late Walter Lord’s book The Good Years, published in 1960 (and now out of print, sadly). Mr. Lord details the saga of the conflicting claims which became — no surprise — more a battle between competing newspapers for circulation than it was for finding out who actually got there first. In fact, the first actual confirmed surface conquest of the North Pole came in 1968 when five men did it on snowmobiles. Their achievement was documented by the U.S. Air Force. And even if Peary’s claim is accepted, there are those who support the claim that Peary himself was not the first man to reach the Pole; it was a member of his team, Matthew Henson. But since Mr. Henson was African-American, the prejudices of the time wouldn’t allow any consideration for acknowledging Mr. Henson’s contribution since, as Mr. Lord noted, in 1909, black men “didn’t count.”

The “conquest” of the Poles, both North and South, represented the last explorations of the frontiers of the planet at a time when we still thought that there was a lot of romance and intrigue in exploration, including Greek tragedy in the conquest of the South Pole. It would be another forty years before Mt. Everest, the highest mountain, was climbed — and men lived to tell about it — and fifty years before we ventured into space with men riding along on a computerized machine that even they knew could be operated by a trained chimpanzee. So it’s not surprising that there was a battle royal about the claim to the Pole and even today, with all our GPS and high-tech equipment, there’s that spark of intrigue when someone sets out to explore the unknown. It tells us something about ourselves; we’re ever curious.