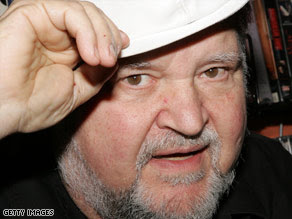 Dom DeLuise, who spiced up such movies as “Blazing Saddles,” “Silent Movie” and “The Cannonball Run” with his manic delivery and roly-poly persona, has died, his son’s publicist told CNN.

Publicist Jay Schwartz did not disclose the cause of death, but DeLuise, 75, had been battling cancer for more than a year.

DeLuise was most famous for his supporting roles in a number of Mel Brooks films, including 1974’s “Saddles” — in which he played a flamboyant musical director who led dancers in a number called “The French Mistake” — and 1976’s “Silent Movie,” in which he played the assistant to Brooks’ director Mel Funn. He was also in the Brooks-directed “The Twelve Chairs” (1970), “Spaceballs” (1987) and “Robin Hood: Men in Tights” (1993).

But he could also assay more serious roles, most notably in the 1980 dark comedy “Fatso,” directed by Brooks’ wife, Anne Bancroft, in which he played an overweight man trying to wean himself from comfort food.

One of my favorite scenes in all of moviedom is from Blazing Saddles where the street fight in Rock Ridge suddenly breaks through the fourth wall and on to his set where, as the “flamboyant” director Buddy Bizarre, he is choreographing a male chorus in the Busby Berkeley-like “French Mistake” number. “What in the hell do you think you’re doing here?” he screams.” This is a closed set!” To which Slim Pickens replies, “Piss on you! I’m working for Mel Brooks!”

Thanks for the laughs.