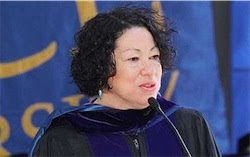 A few words about identity politics.

That’s the knock on Sonia Sotomayor, who was nominated to the Supreme Court last week by President Obama. If confirmed, Sotomayor, who is Puerto Rican, will be the first Hispanic to sit on the nation’s highest tribunal.

That has traumatized some titans of the right. George Will, for instance, complains that ”she embraces identity politics, including the idea of categorical representation: A person is what his or her race, ethnicity, gender or sexual preference is, and members of a particular category can be represented, understood, empathized with only by persons of the same identity.” Some go further, alleging that Sotomayor’s ethnicity carried greater weight with Obama than her qualifications.

That argument would be a lot more persuasive if the right (Will, to his credit, was the exception that proved the rule) had raised it when John McCain chose Sarah Palin as his running mate on the basis of her chromosomal makeup. Sotomayor, at least, has the aforementioned qualifications. Palin, not so much.

Point being, so-called ”identity politics” are practiced at both ends of the political spectrum. And I’m not at all convinced that’s a bad thing — particularly where the high court is concerned.

Contrary to what they’d have us believe, legal judgment is not simply a matter of quoting precedent and applying logic.

If precedent and logic alone were definitive, the court could not have decided, for instance, to endorse segregation in 1896 in clear violation of the 14th Amendment. But because of who they were and what they had known, that panel of white men somehow interpreted the amendment as allowing Jim Crow — a tragic travesty that stood for 58 years.

Would the court have been well-served in 1896 had someone likely to be affected by the ruling been there to offer a counterbalancing interpretation? If the court is debating an issue of importance to women, is not the quality of its deliberation improved if someone in the room is in possession of a uterus?

Yes, emphatically, to both.

Ensuring the presence of diverse people in the deliberation chamber betrays no American principles. Rather, it affirms a core American promise: Liberty and justice.

From another perspective, what is the trashing of Judge Sotomayor telling the Hispanic community about how the conservatives and the GOP really feel about them? Matthew Yglesias fires back:

As anyone who knows me can attest, I don’t have what you’d call a strong “Hispanic” identity. Three of my four grandparents are Jews from Eastern Europe. My paternal grandfather, José Yglesias, was a Cuban-American born in Florida. But that puts the family’s actual Hispanic ancestry pretty far back in the past. He grew up in a Spanish-dominant immigrant community, but spoke English fluently. My dad grew up in an English-speaking household and knows some Spanish. I took a semester of Spanish at NYU one summer. And Cuban-American political identity in the United States is heavily oriented around a highly ideological far-right approach to Latin America policy that neither I nor anyone else in my family shares. The Yglesiases emigrated from Cuba before the Revolution, José was initially a Castro supporter, and though he gave that up he and my dad and I all share what you might call anti-anti-Castro views.

But for all that, I have to say that I am really truly deeply and personally pissed off my [sic] the tenor of a lot of the commentary on Sonia Sotomayor. The idea that any time a person with a Spanish last name is tapped for a job, his or her entire lifetime of accomplishments is going to be wiped out in a riptide of bitching and moaning about “identity politics” is not a fun concept for me to contemplated. Qualifications like time at Princeton, Yale Law, and on the Circuit Court that work well for guys with Italian names suddenly don’t work if you have a Spanish name. Heaven forbid someone were to decide that there ought to be at least one Hispanic columnist at a major American newspaper. 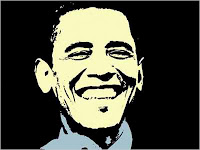 Perhaps not since John F. Kennedy, whose dusty portraits can still be seen in kitchens and barbershops and alongside the antique beer cans at bars like Manuel’s Tavern in Atlanta, has a presidency so fanned the flames of painterly ardor among hobbyist and professional artists.

Mr. Obama’s campaign was well known for inspiring art, including Shepard Fairey’s ubiquitous “Hope” poster, a version of which is now in the National Portrait Gallery in Washington. Months after the election, with the glow of the administration’s first 100 days dimming, it might have been expected that enthusiasm for Obama art would be dimming, too.

Yet the still-ample offerings of original paintings of the president and the first family on eBay and at places like the annual Affordable Art Fair in New York — along with a crop of presidential-art-obsessed Internet sites including obamaartreport.com, artofobama.com and, inevitably, badpaintingsofbarackobama.com — are indications that it might just be a growth industry.

The phenomenon has been a boon to the near-anonymous painting factories crowded together in the suburbs of Shenzhen, China, famous for cranking out copies of masterpieces, along with landscapes and semitasteful nudes. Another one, seemingly based in Germany, offers stately Obamas amid air-brushy likenesses of Tupac Shakur, Bruce Lee and Al Pacino (in his “Scarface” role), advertised as “real hand-embellished” paintings on canvas.

Can black velvet renderings be far behind?

The harrowing truth remains unchanged from what it was before Cheney emerged from his bunker to set Washington atwitter. The Bush administration did not make us safer either before or after 9/11. Obama is not making us less safe. If there’s another terrorist attack, it will be because the mess the Bush administration ignored in Pakistan and Afghanistan spun beyond anyone’s control well before Americans could throw the bums out.