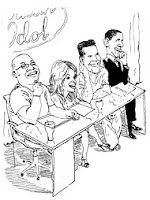 It would be easy to blame the Beltway logjam in gay civil rights progress on the cultural warriors of the religious right and its political host, the Republican Party. But it would be inaccurate. The right has lost much of its clout in the capital and, as President Obama’s thoughtful performance at Notre Dame dramatized last weekend, its shrill anti-abortion-rights extremism now plays badly even in supposedly friendly confines.

Anyone with half a brain in the incredibly shrinking G.O.P. knows that gay bashing will further dim the party’s already remote chance of recruiting young voters to replenish its aging ranks, much as the right’s immigrant bashing drove away Hispanics. This is why Republican politicians now say they oppose only gay marriage, not gay people, even when it’s blatant that they’re dissembling. Naked homophobia — those campy, fear-mongering National Organization for Marriage ads, for instance — is increasingly unwelcome in a party fighting for survival. The wingnuts don’t even have Dick Cheney on their side on this issue.

Most Congressional Republicans will still vote against gay civil rights. Some may take the politically risky path of demonizing same-sex marriage during the coming debate over the new Supreme Court nominee. Old prejudices and defense mechanisms die hard, after all: there are still many gay men in the party’s hierarchy hiding in fear from what remains of the old religious-right base. In “Outrage,” a new documentary addressing precisely this point, Kirk Fordham, who had been chief of staff to Mark Foley, the former Republican congressman, says, “If they tried to fire gay staff like they do booting people out of the military, the legislative process would screech to a halt.” A closet divided against itself cannot stand.

But when Congressional Republicans try to block gay civil rights — last week one cadre introduced a bill to void the recognition of same-sex marriage in the District of Columbia — they just don’t have the votes to get their way. The Democrats do have the votes to advance the gay civil rights legislation Obama has promised to sign. And they have a serious responsibility to do so. Let’s not forget that “don’t ask” and DOMA both happened on Bill Clinton’s watch and with his approval. Indeed, in the 2008 campaign, Obama’s promise to repeal DOMA outright was a position meant to outflank Hillary Clinton, who favored only a partial revision.

So what’s stopping the Democrats from rectifying that legacy now? As Wolfson said to me last week, they lack “a towering national figure to make the moral case” for full gay civil rights. There’s no one of that stature in Congress now that Ted Kennedy has been sidelined by illness, and the president shows no signs so far of following the example of L.B.J., who championed black civil rights even though he knew it would cost his own party the South. When Obama invoked same-sex marriage in an innocuous joke at the White House correspondents’ dinner two weeks ago — he and his political partner, David Axelrod, went to Iowa to “make it official” — it seemed all the odder that he hasn’t engaged the issue substantively.

“This is a civil rights moment,” Wolfson said, “and Obama has not yet risen to it.” Worse, Obama’s opposition to same-sex marriage is now giving cover to every hard-core opponent of gay rights, from the Miss USA contestant Carrie Prejean to the former Washington mayor Marion Barry, each of whom can claim with nominal justification to share the president’s views.

In reality, they don’t. Obama has long been, as he says, a fierce advocate for gay equality. The Windy City Times has reported that he initially endorsed legalizing same-sex marriage when running for the Illinois State Senate in 1996. The most common rationale for his current passivity is that his plate is too full. But the president has so far shown an impressive inclination both to multitask and to argue passionately for bedrock American principles when he wants to. Relegating fundamental constitutional rights to the bottom of the pile until some to-be-determined future seems like a shell game.

As Wolfson reminds us in his book “Why Marriage Matters,” Dr. King addressed such dawdling in 1963. “For years now I have heard the word ‘Wait,’ ” King wrote. “It rings in the ear of every Negro with piercing familiarity. This ‘Wait’ has almost always meant ‘Never.’ ”

The gay civil rights movement has fewer obstacles in its path than did Dr. King’s Herculean mission to overthrow the singular legacy of slavery. That makes it all the more shameful that it has fewer courageous allies in Washington than King did. If “American Idol” can sing out for change on Fox in prime time, it ill becomes Obama, of all presidents, to remain mute in the White House.