Where One Stands — Leonard Pitts, Jr. on black homophobia.

That’s for Marion Barry, who seems to need the reminder.

The former mayor and current city councilman of Washington, D.C. is a longtime supporter of gay rights. So observers were stunned last week when a bill committing the city to recognize same-sex marriages performed elsewhere passed the council on a vote of 12-1.

The ”one” was Barry.

Wait, it gets worse. Barry said his position hasn’t changed but warned that the council needs to move slowly on this issue. ”All hell is going to break loose,” Barry said. ”We may have a civil war. The black community is just adamant against this.” Indeed, after the vote, a group of black ministers reportedly ”stormed” the hallway outside the council chambers, vowing political reprisals.

The Washington Post quotes Barry as saying he voted as he did because ”I am representing my constituents.” He reminded reporters that ”98 percent of my constituents are black, and we don’t have but a handful of openly gay residents.”

That’s a lot of words to say what he could have said in three: I punked out.

There’s something to be said for representing one’s constituents. But there is more to be said for leading them. Barry’s failure to understand the difference is galling in light of the fact that he was once a leader in the civil-rights movement.

One wonders how differently that movement might have turned out had white people such as Clifford Durr, Viola Liuzzo, Ralph McGill, Michael Schwerner, Andrew Goodman and Lyndon Johnson allowed themselves to be cowed by the angry voices of white men and women saying, ”All hell is going to break loose.” For that matter, how much longer might the long night of slavery have lasted had white people like Elijah Lovejoy, William Lloyd Garrison, Harriet Beecher Stowe, Lucretia Mott and Thaddeus Stevens bowed to the fact that the white community was ”just adamant” against freedom.

One wonders, too, whether those black ministers in the hall see their mirror image in generations of white ministers who have used the Bible to condone the evil of slavery (”Servants, be obedient to them that are your masters.”) and the fiction of African-American inferiority (the ”curse” of Ham).

At day’s end, though, the great tragedy here is neither historical amnesia nor moral cowardice. No, the tragedy is embodied in Barry’s description of African Americans as a people for whom open homosexuality is rare. That description is, unfortunately, too accurate — not simply for black Washington, but for black America. We are a socially conservative people.

And our conservatism is, quite literally, killing us.

Tough Times in Toledo — The Washington Post looks at the loss of white-collar jobs in my home town.

Rob Noonan’s friends think he’s a sucker. Laid off from his $140,000-a-year construction management job when the credit markets froze, he still shows up at work, one man working without pay in a cluster of vacant cubicles, trying to make something out of nothing.

While friends are mystified that he would toil for the developer who fired him after 16 years, Noonan figures voluntary work is his best path to a real job at real pay. And in an employment market this awful, he adds, “I really don’t have anything better to do.”

Noonan, 56, is a casualty of an economic crisis that has reached into the white-collar ranks, costing the jobs of thousands of executives, supervisors and office workers who never thought the paychecks would stop. Watching with disbelief and then despair as their comfortable lifestyles washed away, they are recalibrating their expectations in ways they never imagined.

“The key is to keep a lot of stuff going on,” Noonan said during his fifth jobless month. “The most important thing is that going in to work has given me a feeling of significance. It still keeps my spirits up.”

In this corner of Ohio, the workforce is contracting at an alarming speed, with unemployment climbing to rates more typical of counties in Appalachia. In March, unemployment in Toledo reached 12.6 percent, an increase of more than 50 percent over March 2008.

More than 1,200 people attended a Toledo Zoo job fair to fill about 200 minimum-wage summer jobs running the carousel or selling hot dogs. Another 500 dropped off résumés.

The city and its economy, long tied to the auto industry in nearby Detroit, never recovered from a downturn at the beginning of the decade. A nascent wind- and solar-power sector offers hope and some jobs, but not nearly enough to keep up with recent losses in manufacturing, real estate and finance.

Larry B. Dillin, head of Dillin Corp. and Noonan’s former boss, laid off 60 percent of his workforce of about two dozen in the Toledo suburb of Perrysburg. In a period that reminds him of the weeks after the 2001 terrorist attacks, he sees “a lot of people with a deer-in-the-headlights stare, people not knowing what normal is anymore.”

As President Obama’s economic recovery policies are tested, employees cut from the hardest-hit sectors are calculating what their recoveries will require. It takes the average worker about five months to find a new job, a month longer than a year ago. The new position often comes with a drop in salary, seniority and security.

“The quality of people coming to my door is incredible, and the options are minimal,” said Bruce Rumpf, president of Toledo-based temp agency Job1USA. “What I’m seeing is a lot of talented people with an inability to recapture anything near what they were at. Everyone’s going backwards.”

Frank Rich — The web and the future of journalism. 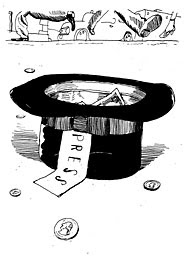 One of the freshest commentators on Internet culture, Clay Shirky, has written, correctly, that nobody really knows what form journalism will take in the evolving post-newspaper era. Looking back to the unpredictable social and cultural upheavals brought about by Gutenberg’s invention of movable type, he writes, “We’re collectively living through 1500, when it’s easier to see what’s broken than what will replace it.” So who will do the heavy journalistic lifting? “Whatever works.” Every experiment must be tried, professional and amateur, whether by institutions like The Times or “some 19-year-old kid few of us have heard of.”

What can’t be reinvented is the wheel of commerce. Just because information wants to be free on the Internet doesn’t mean it can always be free. Web advertising will never be profitable enough to support ambitious news gathering. If a public that thinks nothing of spending money on texting or pornography doesn’t foot the bill for such reportage, it won’t happen.

That’s why the debate among journalists about possible forms of payment (subscriptions, NPR-style donations, iTunes-style micropayments, foundation grants) is inside baseball. So is the acrimonious sniping between old media and new. The real question is for the public, not journalists: Does it want to pony up for news, whatever the media that prevail?

It’s all a matter of priorities. Not long ago, we laughed at the idea of pay TV. Free television was considered an inalienable American right (as long as it was paid for by advertisers). Then cable and satellite became the national standard.

By all means let’s mock the old mainstream media as they preen and party on in a Washington ballroom. Let’s deplore the tabloid journalism that, like the cockroach, will always be with us. But if a comprehensive array of real news is to be part of the picture as well, the time will soon arrive for us to put up or shut up. Whatever shape journalism ultimately takes in America, make no mistake that in the end we will get what we pay for.