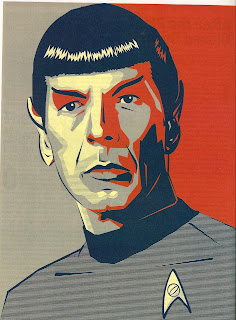 It is always a risk to take something like a book or a character that has become an iconic part of culture and attempt to redefine it or take it in a new direction. Devotees of that icon will view any attempt to alter the universe with deep suspicion, and as flawed and tattered as it might be, there will be a very high bar set for anyone who tries to reshape — or “reboot” — the sacred world to prove that what they have wrought is truly an improvement on what came before. You can apply it to almost anything: architecture, literature, even a classic automobile (how many times did it take Ford to get the next generation of the Mustang right?). That certainly applies to the new film Star Trek; devoted Trekkers have been waiting for a long time to see what director J.J. Abrams would do with the world created by Gene Roddenberry nearly fifty years ago, and even those of us who have been Reform Trekkers — fans of the series but not so Orthodox as to build the bridge of the USS Enterprise in our garage or celebrate Klingon holidays — have been looking forward to seeing what would happen to it with modern technology, a large budget, and in the hands of a director who has a reputation for fast action films (Mission Impossible III) and who was three months old when the original series premiered on NBC in September 1966. I don’t think they will be disappointed. In fact, I think they will like it enough to accept the alternative universe of the 23rd century, Star Fleet, and the crew of the Enterprise and boldly go with it where no one has gone before.

(There are spoilers below the fold, so if you haven’t seen the film and don’t want key plot elements revealed, stop reading now.)

The film has been labeled as a “prequel,” but in the true meaning of the word, it really isn’t. Yes, we get the backstory on the major characters and setting. We meet James T. Kirk the minute he’s born and watch as he grows up in Iowa as a wild kid trashing his step-dad’s classic Corvette and later as a cocky teen who even in the middle of a bar fight is brash enough to smirk when he accidentally touches a woman’s breasts. (Now we know how turned into the always-horny Captain Kirk as played by William Shatner in the original series who always got the girl.) Of course all is forgiven because he’s really good at being a Star Fleet cadet with the skills to challenge authority and get away with it. This isn’t really a ground-breaking character, either; it’s Hippolytus, Icarus, Mercutio, and every role Tom Cruise played in the 1980’s from Top Gun to Days of Thunder, right down to the killer smile, buff bod, and bright blue eyes. We also see Spock growing up as a tormented youth on his home world of Vulcan; made to feel like an outsider by his own feelings and his bullying classmates. That’s not exactly a new plot line either; nerdy kids getting beat up is the stuff of classic farce. We are introduced to the rest of the crew — Dr. McCoy (Karl Urban), Uhura (Zoe Saldana), Sulu (John Cho), Chekhov (Anton Yelchin), and Scotty (Simon Pegg) — in such ways that fill in the backstory of each of them — how Dr. McCoy came to be called “Bones” and what Uhura’s first name is — and giving us sense of comfort of being with these friends because you recognize them. But from there on we leave the past future behind, so calling it a “prequel” isn’t quite accurate.

The storyline takes a sharp turn away from the reality we came to know through the five TV series, the previous ten films, and countless other stories in books and fan fiction and creates its own time-line. Ironically, it uses one of the oldest plot devices in the Star Trek canon: time travel and the paradox of changing the past to correct the future. This time it is in the hands of a renegade Romulan named Nero (Eric Bana) who travels back in time to seek revenge on Spock for failing to protect his world from destruction by a supernova. Nero therefore plans to destroy Vulcan. He succeeds in imploding the planet, and Kirk and his crew set out to destroy Nero, and they do. But contrary to the deux-ex-machina gimmick of time travel and temporal disruption often seen in the series (most notably the Star Trek Voyager two–part episode “Year in Hell”), the old timeline is not magically restored at the end of the movie: Vulcan has been destroyed, the Vulcans are, as Spock puts it, an “endangered species.” This opens up many unexplored world for subsequent films in this new universe while leaving the other intact. Open-minded Trekkers should welcome this. There are, as Spock once observed, always possibilities.

Alan Alda once noted that eighty percent of people who go to the movies are between the ages of 12 and 22 and they go to see three things: defiance of authority, destruction of property, and people taking off their clothes. This movie has all three of them, and I suspect, screenwriters Roberto Orci and Alex Kurtzman knew they had to fill that quotient; besides, that’s what people expect from an action-adventure movie with merchandising tie-ins to Burger King. (If it’s any guide, the trailer trash preceding the showing of the film was nothing but previews of forthcoming doom, destruction, and skin. The theatre knew their prospective audience.) But since this is Star Trek and you can’t really do it without a Message, it has that as well: the powerful relationship between fathers and and their offspring and how our past truly does foretell our future. Even with all the pyrotechnics and scenery chewing by the bad guy, it’s surprisingly well-done.

Spock is one of the most enigmatic and fascinating, so to speak, characters in contemporary drama. Whole books have been written about this distant yet compelling half-human/half-Vulcan (and not a few people, both male and female, find him irresistible in terms of physical attraction). Kirk may have all the right moves and be the well-muscled hottie (done with the just the right amount of bravado and testosterone by Chris Pine), but if he is the brash flyboy of the Tom Cruise genre, then Spock (played with subtle brilliance by Zachary Quinto) is the wise elder played by the likes of Paul Newman (The Color of Money) or even Dustin Hoffman (Rain Man). (Or, to jump to a long time ago in a galaxy far, far away, he is Obi-wan to young Luke Skywalker.) That makes him the central character in the story. In this film the writers have done more to add to the depth of his feelings (and giving at least a bow to Shakespeare) by providing him a scene reminiscent of Hamlet where he meets his future self (Leonard Nimoy) and calls him “Father.” In this case, the loss of his mother and home provides him with the soul-searching that permeates his every move and calls into question his very essence as a Vulcan. There may be phasers and warp cores, man-eating monsters and artificial singularities that suck up entire planets, but this film is essentially about Spock. In purely dramatic terms, he is the one on whom the plot depends, and his choices, both in the future and in the now, determine the outcome by dealing with the dilemma that the once and future Spock faces.

Star Trek is a fun and highly entertaining film, and it is respectful enough of the source material to use some of the lines — and even the type style for the title — from the original series, as well as Alexander Courage’s TV theme music for the closing credits. If this is the future of the Star Trek universe, then, to quote another captain of the Enterprise, make it so.

(Illustration by Quickhoney for Newsweek.)