Pat Buchanan and a “white nationalist” named Peter Brimelow hosted a meeting last weekend with some of his fellow wingnuts at which they mocked Judge Sonia Sotomayor and made the case for “English Only” legislation and making English the official language of the United States.

Okay, whatever they say, but check out the banner they met under and how they spelled “conference”: 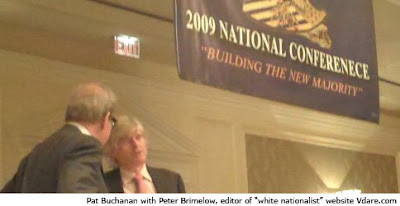