A True Grass-Roots Movement — Jeremy W. Peters in the New York Times on why there is no national leader of the gay-rights movement. 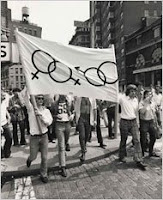 Every so often, the American social order is reshuffled. And that upheaval is typically accompanied by a prominent face.

Yet the gay rights movement, which is about to enter its fifth decade, has never had a such a leader despite making remarkable strides in a relatively short period of time.

Gay people have no national standard-bearer, no go-to sound-byte machine for the media. So when President Obama last week extended benefits to same-sex partners of federal employees, there was no alpha gay leader to respond with the movement’s official voice, though some activists criticized the president for not going far enough.

Until 1973, homosexuality was classified as a mental illness by the American Psychiatric Association. Today, same-sex couples can marry in six states. How did a group that has been so successful over the last generation in countering cultural prejudice and winning civil rights make it so far without an obvious leader?

One explanation is that gay and lesbian activists learned early on that they could get along just fine without one. Even in the movement’s earliest days following the violent uprising at the Stonewall Inn in Greenwich Village 40 years ago this week, no singular leader emerged. Some historians believe this is in part because it was — and still is — difficult for the average American to empathize with the struggles of gay people.

“The gay movement has always had a problem of achieving a dignity or a moral imperative that the black civil rights movement had, or the women’s rights movement claimed,” said Dudley Clendinen, who co-wrote the book “Out for Good: The Struggle to Build a Gay Rights Movement in America” and now teaches writing at Johns Hopkins University. “Because this movement is fundamentally about the right to be sexual, it’s hard for the larger public to see that as a moral issue,” he said.

Standing on their own — Trudy Rubin in the Philadelphia Inquirer on not intervening in Iran.

The ongoing drama in Iran marks a turning point in Middle East history – precisely because the United States has chosen, so far, not to intervene.

The Republican politicians charging President Obama with failing to defend Iranian “freedom” have totally missed the significance of what happened last week in Tehran.

Whatever occurs next will not detract from this reality: The unprecedented protests in Tehran last week, with demonstrators marching peacefully for new and fair elections – and then being attacked violently by police and militia – were organized by Iranians themselves.

This flies in the face of the widespread Middle Eastern belief that the hidden hand of the West is always involved, either trying to impose regime change or trying to prevent it.

Iranians still obsess about the U.S. role in overthrowing elected Prime Minister Mohammad Mossedegh in 1953. But in this case, even Iran’s Supreme Leader, Ayatollah Ali Khamenei, in his harsh speech Friday demanding an end to protests, couldn’t credibly claim the United States was behind the rallies. He could only charge that U.S. officials were encouraging the demonstrators with “remarks about human rights.”

The Obama administration did not organize or fund these marchers (nor is it calling for regime change, leaving that choice to the Iranian people). Khamenei may accuse opposition leaders of working with the CIA, but this time the charge will ring hollow to most Iranians – and to the wider Middle East.

Indeed, what Iranians have done so far is to put together an amazing campaign of (mostly) nonviolent protest, with brilliantly improvised tactics. The protests have been organized via networks, without any central leadership, said Abbas Milani, director of Iranian studies at Stanford University.

“People have used e-mails and word of mouth,” he said, “and even the postmen have given people directions to where demonstrations are happening,” adding, “People are awed by the level of cooperation.”

Peter Ackerman, founder of the International Center on Nonviolent Conflict in Washington, and former board chairman of Freedom House, said he believed it was wise to let the Iranian opposition pick its own tactics without U.S. interference or direction.

“We don’t want to be an anchor on the opposition,” he said, “in a way that permits Ahmadinejad to claim they are stooges of Obama.” That, he said, would decrease the chance of crucial defections from inside the regime.

Just about every Iran expert with whom I’ve spoken echoed this thinking. So did Iranian opposition leaders I met in Tehran in 2006.

And so, by the way, do Republicans like Henry Kissinger, former Secretary of State James Baker, and Sen. Richard Lugar. They know that Iran is not, I repeat NOT, a clone of Poland or Czechoslovakia when they rebelled against the Soviets. East European dissidents all wanted U.S. intervention. Iran is in the Middle East, where Western intervention has a bad name. 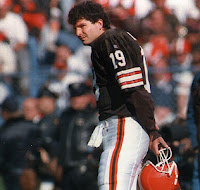 The IRS and the creditors and an angry ex-wife and an avalanche of attorneys are circling the chaos that used to be Bernie Kosar’s glamorous life, but that’s not the source of his anxiety at the moment. He is doing a labored lap inside his Weston mansion, the one on the lake near the equestrian playpen for horses, because he wants to be sure there are no teenage boys hiding, attempting to get too close to his three daughters. He shattered a Kid Rock-autographed guitar the other day while chasing one teenager out of his house because he doesn’t mind all of the other boys within the area code thinking the Kosar girls have an unhinged Dad.

”There are a million doors in this place,” he says. ”Too many ways to get in.”

So up and down the spiral staircases he goes, a rumpled mess wearing a wrinkled golf shirt, disheveled graying hair, and the scars and weariness from a lifetime’s worth of beatings. He has no shoes on, just white socks with the NFL logo stitched on because he’s never really been able to let go of who he used to be. He is coughing up phlegm from a sickness he is certain arrived with all the recent stress of divorce and debt, and now he doesn’t walk so much as wobble his way into one of the closets upstairs, where he happens upon some painful, wonderful memories he keeps sealed in a plastic cup.

His teeth are in there. So is the surgical screw that finally broke through the skin in his ankle because of how crooked he walked for years. He broke that ankle in the first quarter of a game against the Dolphins in 1992; he threw two touchdown passes in the fourth quarter anyway. Don Shula called him the following day to salute him on being so tough, but Kosar is paying for it with every step he takes today on uneven footing. The old quarterback shakes the rattling cup, then grins. There are about as many real teeth in the cup as there are in what remains of his smile.

The test for Obama is simple enough. If the fortunes in American households rise along with Wall Street’s, he is home free — even if his porous regulatory fixes permit a new economic meltdown decades hence. But if, in the shorter term, the economic quality of life for most Americans remains unchanged as the financial sector resumes living large, he’ll face anger from voters of all political persuasions. When the Fox News fulminator Glenn Beck says “let the banks lose their tails, they need to,” he illustrates precisely where right-wing populism meets that on the left.

It’s still not too late for course correction. Before rolling out his financial package, Obama illustrated exactly what’s lacking when he told John Harwood on CNBC: “We want to do it right. We want to do it carefully. But we don’t want to tilt at windmills.”

Maybe not at windmills, but sometimes you do want to do battle with fierce and unrelenting adversaries, starting with the banking lobby. While the restraint that the president has applied to the Iran crisis may prove productive, domestic politics are not necessarily so delicate. F.D.R. had to betray his own class to foment the reforms of the New Deal. Lyndon Johnson had to crack heads on Capitol Hill to advance the health-care revolution that was Medicare. So will Obama for his own health-care crusade, which is already faltering in the Senate courtesy of truants in his own party, not just the irrelevant Republicans.

Though television talking heads can’t let go of the cliché that the president is trying to do too much, the latest Wall Street Journal/NBC News poll says that only 37 percent of Americans agree. The majority knows the country is in a crisis and wants help. The issue has never been whether Obama is doing too much but whether he will do the big things well enough to move us forward. Now that the hope phase of his presidency is giving way to the promised main event — change — we will soon find out.

Doonesbury — Is the caller there?