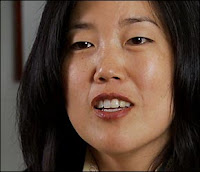 In her quest to upend and transform the District’s long-broken school system, Rhee has acquired a sometimes-painful education of her own. The lessons, in many respects, tell the story of her tenure as her second school year draws to a close Monday: that money isn’t everything; that political and corporate leaders need to be stroked, even if you don’t work for them; that the best-intentioned reforms can trigger unintended consequences; and that national celebrity can create trouble at home.

Rhee arrived in 2007 as the surprise choice of Mayor Adrian M. Fenty (D), who introduced her hours after he took control of what was a 49,000-student system (now down to about 45,000). Compared with predecessors, she had scant experience. Then 37, the former Baltimore grade-school teacher had spent the past decade at a teacher recruiting and research firm she founded. She also had the effusive endorsement of her mentor, New York Schools Chancellor Joel I. Klein, who had retained Rhee as a personnel consultant.

Even by the high-turnover standards of D.C. public schools leadership, Rhee’s watch has been brief — well below the average of three years, three months for her seven predecessors, most recently Clifford Janey (two years, nine months).

But new pockets of promise — some initiated by Janey and sustained by Rhee, others forged by her — are visible. Three freshly restored schools — Phelps High in Northeast, Hardy Middle in Northwest and Sousa Middle in Southeast — are the leading edge of a $2 billion plan to modernize a crumbling campus inventory. An “academic power hour” of extra instruction is part of a revamped after-school program in 100 schools.

Last year’s DC-CAS standardized tests showed increases in reading and math proficiency rates of 8 to 11 percentage points since 2007. A handful of schools are piloting efforts to reach the most neglected and vulnerable students: those in special education, those with emotional or family issues and those at risk of dropping out. High school students, plagued for years by shoddy recordkeeping and class schedules that often left them with insufficient credits to graduate, can take “credit recovery” courses on weekends, after school and in the summer. Although not as complete or as rigorous as regular offerings, they create a path to a diploma for students who were barred through no fault of their own.

Spending for professional development is up 400 percent since 2007 in an effort to establish a coherent set of expectations about what constitutes good teaching.

Rhee acknowledges that the successes pale in comparison to the task of reversing decades of failure.

“The reality in Washington, D.C., is that we continue to fail the majority of kids who are put in our care every day,” she said at a panel discussion last month. In a draft five-year action plan, introduced in October, she targets 2013 as the year when the D.C. student experience will be “dramatically different.”

Full disclosure: Ms. Rhee and I attended the same school in Toledo, but at different times. While we have many friends in common, I have never met her in person.

Stolen — Laura Secor reports for The New Yorker on the Iranian election.

There can be no question that the June 12, 2009 Iranian presidential election was stolen. Dissident employees of the Interior Ministry, which is under the control of President Ahmadinejad and is responsible for the mechanics of the polling and counting of votes, have reportedly issued an open letter saying as much. Government polls (one conducted by the Revolutionary Guards, the other by the state broadcasting company) that were leaked to the campaigns allegedly showed ten- to twenty-point leads for Mousavi a week before the election; earlier polls had them neck and neck, with Mousavi leading by one per cent, and Karroubi just behind. Historically, low turnout has always favored conservatives in Iranian elections, while high turnout favors reformers. That’s because Iran’s most reliable voters are those who believe in the system; those who are critical tend to be reluctant to participate. For this reason, in the last three elections, sixty-five per cent of voters have come from traditional, rural villages, which house just thirty-five per cent of the populace. If the current figures are to be believed, urban Iranians who voted for the reformist ex-president Mohammad Khatami in 1997 and 2001 have defected to Ahmadinejad in droves.

What is most shocking is not the fraud itself, but that it was brazen and entirely without pretext. The final figures put Mousavi’s vote below thirty-five per cent, and not because of a split among reformists; they have Karroubi pulling less than one per cent of the vote. To announce a result this improbable, and to do it while locking down the Interior Ministry, sending squads of Revolutionary Guards into the streets, blacking out internet and cell phone communication and shuttering the headquarters of the rival candidates, sends a chilling message to the people of Iran—not only that the Islamic Republic does not care about their votes, but that it does not fear their wrath. Iranians, including many of the original founders and staunch supporters of the revolution, are angry, and they will demonstrate. But they will be met with organized and merciless violence.

Ugly — Leonard Pitts, Jr. on the consequences of racism.

We act as if it were all a game, as if it means nothing when people of position and visibility spew garbage, validating and galvanizing the unhinged and the disaffected who need little encouragement to believe all their problems are caused by Them. We act as if we do not toy with fire when people of authority claim white Christians are a victimized minority or Hispanics a threatening and faceless Other. We act as if we were not heirs and witnesses to a blood-soaked history that tells us exactly where this hate some of us so fecklessly stoke will logically, inevitably lead.

I’ve always liked the Holocaust Museum because it is a stark reminder in an era where too many are in a hurry to forget. And so it is even today, even quiet and locked up tight. Behind yellow tape it sits, scene of a hate crime authored by an old man who thought he was great because his skin was pale. An American flag droops limply at half staff as if tired of waiting, waiting for the last days of creatures such as this.

Conservatives have legitimate ideological beefs with Obama, rightly expressed in sharp language. But the invective in some quarters has unmistakably amped up. The writer Camille Paglia, a political independent and confessed talk-radio fan, detected a shift toward paranoia in the air waves by mid-May. When “the tone darkens toward a rhetoric of purgation and annihilation,” she observed in Salon, “there is reason for alarm.” She cited a “joke” repeated by a Rush Limbaugh fill-in host, a talk-radio jock from Dallas of all places, about how “any U.S. soldier” who found himself with only two bullets in an elevator with Nancy Pelosi, Harry Reid and Osama bin Laden would use both shots to assassinate Pelosi and then strangle Reid and bin Laden.

This homicide-saturated vituperation is endemic among mini-Limbaughs. Glenn Beck has dipped into O’Reilly’s Holocaust analogies to liken Obama’s policy on stem-cell research to the eugenics that led to “the final solution” and the quest for “a master race.” After James von Brunn’s rampage at the Holocaust museum, Beck rushed onto Fox News to describe the Obama-hating killer as a “lone gunman nutjob.” Yet in the same show Beck also said von Brunn was a symptom that “the pot in America is boiling,” as if Beck himself were not the boiling pot cheering the kettle on.