The Making of a Secret Service Agent — Laura Blumenfeld of the Washington Post profiles the men and women as they train to protect the president. 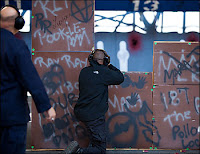 LESSON ONE: Get Ready To Die

The teacher walks into the mat room.

“Cut that [expletive] out. Don’t act like you give a crap about my morning.”

Steve Mixon smiles, or maybe it’s a snarl. Before he became an instructor at the Secret Service training camp outside Washington, Mixon served as a team leader on President George W. Bush’s Counter Assault Team.

“Everyone’s going to leave today in some degree of pain,” Mixon tells the special agent trainees.

The 24 recruits, dressed in black combat pants and jackets, stiffen into four rows, jingling handcuffs. Scott Swantner clenches his jaw. Krista Bradford rubs raw knuckles. One trainee, who broke a rib, is keeping it a secret, fearing he’ll be discharged.

“Everything is in play here, guys. Everything you learned from Day One,” Mixon tells them in a basement that muffles rifle blasts. “Assailant control. Guillotine chokeholds.”

For the members of Special Agent Training Class No. 283, this is finals time. They have been cramming here for months, since days after the election of Barack Obama, hoping to join the men and women charged with protecting the president.

Not all of them will make it.

If they fail, they will leave humiliated. If they pass, they’ll become members of an elite, stealthy service during a period of exceptional pressures. At their annual party, Ralph Basham, the former director, greeted his replacement: “I’m the happiest guy in Washington because I’m not the director of the Secret Service anymore.”

With the rise of Islamic terrorism, the agency’s roster of protectees has grown. With the election of the first African American president, public scrutiny has exploded. Presidents typically receive 3,000 threats a year, says a Secret Service expert. Obama is outpacing the average.

More stories below the fold.

THERE are dog years, cat years, and then there are theater company years, which can last anywhere between the blink of a critic’s dismissive eye and a perennial slog to make art in the face of commercial pressures and fickle audiences.

Accordingly, the 25th anniversary of Powerhouse Theater, the eight-week summer program at Vassar College, in Poughkeepsie, N.Y., is something of a jaw-dropper, not least in the eyes of its co-founders, who are still its producing directors, the once-fledgling theater producers Max Mayer and Leslie Urdang, and Mark-Linn Baker, the actor. Because they also aimed to nurture short films, they named their endeavor New York Stage and Film and the residential partnership with Vassar after the Powerhouse, the performance space converted from the college’s early-20th-century power plant.

“When you’re in your 20s, you don’t imagine anything lasting 25 years,” Ms. Urdang said of the starry-eyed undertaking hatched in 1984 to provide emerging artists the wherewithal to develop and present new work in readings, workshops and productions, with a ban on reviewers.

Ms. Urdang spoke from Los Angeles, where she is president of Olympus Pictures, currently represented by the Sundance hit “Adam,” a first film written and directed by Mr. Mayer, who has been away from Powerhouse on publicity tour for the movie. Mr. Baker was in Washington, shooting a movie with Jack Nicholson. Johanna Pfaelzer, associated with the troika in a variety of capacities since 1998, is the artistic director and runs the program with Edward Cheetham, the producing director installed on the Vassar end. The original theater has also since expanded, to three. “I call it a Fresh Air Fund for city artists,” Ms. Pfaelzer said.

He is 5’7”, weighs 150 pounds, wears glasses and uses a cane. His legs are of unequal length, his mustache and goatee are gray. He is 58 years old and looks it.

It’s important to see Gates — scholar, author, documentarian, Harvard University professor and African-American man — because that’s what Sgt. James Crowley of the Cambridge, Mass. police department apparently did not do in the July 16 confrontation that has ignited debate about racial bias in the U.S. ”justice” system. For the three of you who do not know: the incident began when Gates, returning home from a trip to China, found his front door jammed. When he and his driver tried to force it, a neighbor, thinking it a burglary in progress, did the right thing and called police. Crowley responded, finding the driver gone and Gates inside. There are two versions of what happened next.

Police say Gates refused to comply with Crowley’s order to step outside, initially would not identify himself and became belligerent, yelling that Crowley, who is white, is a racist, that he didn’t know who he was messing with and that this was only happening because Gates is black.

Gates says he promptly produced his driver’s license and Harvard ID, that the officer refused to provide his name and badge number and that he could not have yelled anything because he has a severe bronchial infection.

This much is not in dispute: Gates was arrested after providing proof he was lawfully occupying his own home. The police report says he was ”exhibiting loud and tumultuous behavior in a public place.” That being his own front porch.

Small wonder the charge has been dropped.

And here, Sgt. Crowley’s defenders would want you to know he is not some Central Casting redneck, but an experienced officer who has led diversity workshops.

On the other hand, Gates is hardly Sister Souljah himself. Rather, he is a man who did the things African Americans are always advised to do — work hard, get a good education, better yourself, only to discover that in the end, none of it saved him.

In the end, he still winds up standing on his front porch with his wrists shackled, just like any drug dealer or carjacker anywhere.

Because sometimes, they just don’t see you. It’s one of the most frustrating verities of African American life. Sometimes you simply know: They are looking your way but seeing their fears, their preconceptions, their stereotypes, that other black guy who did them wrong — everything except the one and only you.

Frank Rich on the legacy of Walter Cronkite —

To appreciate how special Cronkite’s achievements were, consider our recent past. As the Bush administration hyped Saddam Hussein’s nonexistent W.M.D. and nonexistent link to 9/11, The Times and The Post too often enabled the fictions. But at least some reporters at these papers and others elsewhere were on to the hoax — even if their findings were buried in the back pages. At the networks, Cronkite’s heirs were not even practicing journalism. They invited administration propagandists to trumpet their tales of imminent mushroom clouds with impunity.

Not much changed after the invasion. When Ted Koppel, then of ABC News, dared to merely recite the names of the American dead on “Nightline” a year into the war, the assault from Bush-Cheney allies, including in the broadcasting industry, was so fierce that Koppel’s peers retreated from the fray. In the months when it might have made a difference, no network television anchor of Cronkite’s prominence challenged the administration’s silver linings in Iraq as he had L.B.J.’s in Vietnam.

If anything, the spirit of another recently departed lion of the establishment — Robert Strange McNamara, born five months before Cronkite in 1916 — may live on more potently at the nexus of American power and journalism than that of the CBS anchorman.

When McNamara died this month, many recalled his status as Exhibit A of what David Halberstam labeled “the best and the brightest,” the brilliant and arrogant Kennedy-Johnson team that blundered into a quagmire. Far less was said about how McNamara, at his height, wielded that image to spin a dazzled Washington press establishment on his misplaced optimism about the war. The Washington Post’s obituary, pointedly or not, included a photo of a smiling McNamara enjoying cocktails with a powerful syndicated Post columnist (and Vietnam apologist), Joseph Alsop. The obituary also noted that McNamara served on The Post’s board — a sinecure he was awarded after he had helped send some 50,000 Americans to pointless deaths.