Our drive from Toledo to Stratford is normally the same; up I-75 to Detroit, cross into Canada via the Ambassador Bridge to Windsor, then up the 401 past London to back roads and into Stratford. It takes about five hours, and aside from the city traffic around the bridge, it’s through flat Midwestern farmland.

But this year we did things a little differently. We didn’t have to hurry to get here to get ready to see a show; the only plans we had were dinner reservations at my father’s favorite restaurant, Rundle’s, and that was at 7:30. So before we left, rather than horking down a fast-food gut bomb at one of the service centres on the 401 (they’re all closed for remodeling between Windsor and Toronto, anyway), we packed a picnic lunch and looked for a nice little park along the way to stop and enjoy being outdoors.

It worked out perfectly. The trip across the border was quick — the Customs officer looked at our passports, asked us where we were going, and what plays we were going to see — then waved us through. The 401 is undergoing massive reconstruction, but we found our way easily to Chatham, and then got off and headed south a short distance to Rondeau Provincial Park. We found a picnic table in the shade, had our lunch, looked around at the beautiful surroundings, and then headed on back along some back roads to the highway.

On the way we passed through some small towns, including the beautiful village of Ridgetown. 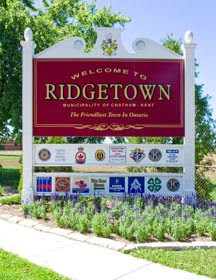 Ridgetown is known for its tree-lined streets, quaint Victorian atmosphere and interesting shops. There are many examples of gingerbread-decorated homes and heritage buildings. The Ridge House Museum offers an authentic glimpse of life as it was in 1875. Two landmarks stand out as you approach Ridgetown from any direction – the green water tower and steeple of the United Church on Erie Street which was demolished in December 2008. On a clear day (if you can climb to a point high enough) they are visible from the city of Chatham 32 kilometres away. If there is a ‘logo’ for Ridgetown, it is either a spreading maple tree or an image of trees with the water tower standing proud above them.

Check out the website of “the friendliest town in Ontario.” 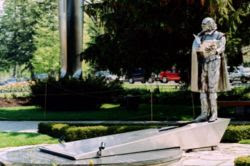 The rest of the drive took us through Ingersoll, Thamesford, and Kintore, all in the gently rolling hills of rural Ontario, past farms, fields of corn and wheat, and a few places with livestock, including a farm that had a sign by the road that said, “Please do not honk at the sheep.” (There were no sheep in sight, and I’m wondering why, even if there were, that it would occur to someone to honk at them.) And now we’re here in Stratford, a place that has shown that even in small towns — like Independence, Kansas as well — the arts are alive and well off the beaten path.