Assuming my secret identity as a theatre scholar…

Two previously unproduced plays by William Inge are being staged this summer in New York. 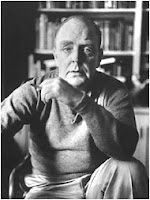 One of them, “The Killing,” is part of the Summer Shorts festival at 59E59 Theaters in Manhattan. This story about a man so terrified of committing suicide that he asks another man to kill him has parallels to Inge’s life. He killed himself in 1973 after struggling for years with depression and alcoholism.

Pain permeates most of Inge’s work. His major plays, “Come Back, Little Sheba,” “Picnic,” “Bus Stop” and “The Dark at the Top of the Stairs,” portray rural Americans struggling with sexual repression (he was gay), alcoholism, small-town gossip and religiosity.

These issues haunted Inge most of his adult life, said Peter Ellenstein, artistic director of the William Inge Center for the Arts in Independence, Kan., Inge’s hometown. Inge, who won the Pulitzer Prize for “Picnic” in 1953 and an Academy Award for writing the 1961 film “Splendor in the Grass,” sought approval from townsfolk who often scorned him for being a homosexual.

“The Killing,” which runs through Aug. 27, is the second rediscovered Inge play to receive its world premiere in New York this year. The Flea Theater in SoHo staged a reading of the three-act “Off the Main Road” on May 11 with Sigourney Weaver, Jay O. Sanders and Frances Sternhagen. The Flea is considering staging a full production of it or another unperformed play by Inge this fall.

As you might remember, I saw the world premiere of some unpublished plays at the Inge Festival last April, and I’ve known about some of his unproduced plays for a lot longer. That’s because I’ve known his heirs as family friends for about fifty years, and Inge’s niece, my dear friend the late JoAnn Kirchmaier, told me that she knew Bill had written things he’d never really shared with his agent; he thought they weren’t worth it.

I’m glad to see they’re seeing the light of the stage, and I hope these plays will get a new generation to find that there’s more to Inge than just the four plays that made him famous.

Kudos to Peter Ellenstein for getting the word out.