The birthers are all atwitter with the latest attempt to prove that President Obama isn’t one of us; World Net Daily, which could charitably be described as far-right bull-goose loony, has found the smoking gun: a birth certificate from the “Republic of Kenya” dated February 1964 that states that Barack Hussein Obama was born there in 1961. Except that even a cursory check of history and reality reveals it is a forgery, and a bad one at that. Below the Beltway takes care of the details.

First of all, there’s a question of why a birth registration record would be issued in 1964 for a child born three years earlier who was not even living in the country at the time. This is significant because any original birth record would be a British colonial record, not a Kenyan record. Kenya was still a British colony in 1961, and did not become independent until December 12, 1963.

Finally, this actually [sic] allegation has come up before, albeit without documentary “proof” purporting to establish it, and seemingly debunked:

The document, supposedly “certified with an embossed seal” and “witness signatures” says America’s next commander in chief was born at Coast Province General Hospital in Mombasa at 7:24pm on August 4, 1961.

Officials at the hospital confirm they.ve been besieged with requests for information on Obama.s birth but haven.t been able to find any record of it.

.We do not have computerized records going back to the 1960.s and can only sort through our archives by hand,. Dr. Christopher Mwanga, an administrator at the Mombasa hospital tells GLOBE. .We have searched for all the names of babies born on Aug. 4, 1961, and have not found the name of Barack Hussein Obama. That is all I can tell you..

The hospital has no records, and yet there’s this document, purportedly created three years after Obama’s birth, by officials of a country that wouldn’t exist for another ten months, that has miraculously appeared.

Something tells me that the birthers are going to be sadly disappointed when this one is revealed for the forgery it most likely is.

They’ll have to go back to smoking something else.

Meanwhile, Little Green Footballs, a site that brooks no love for progressives but knows nutsery when they see it, has unearthed — pun intended — the true birth certificate: 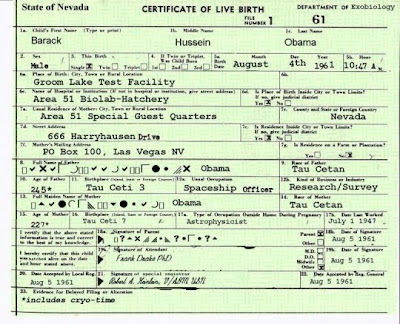 The truth is out there….