Another Casualty of War — Erica Goode reports in the New York Times on the rising rate of suicide in returning veterans. 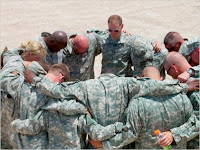 Sgt. Jacob Blaylock flipped on the video camera he had set up in a trailer at the Tallil military base, southeast of Baghdad.

He lit a cigarette, inhaled deeply, blew the smoke upward.

For almost a year, the soldiers of the 1451st Transportation Company had been escorting trucks full of gasoline, building materials and other supplies along Iraq’s dark, dangerous highways. There had been injuries, but no one had died.

Their luck evaporated less than two weeks before they were to return home, in the spring of 2007. A scout truck driving at the front of a convoy late at night hit a homemade bomb buried in the asphalt. Two soldiers, Sgt. Brandon Wallace and Sgt. Joshua Schmit, were killed.

The deaths stunned the unit, part of the North Carolina National Guard. The two men were popular and respected — “big personalities,” as one soldier put it. Sergeant Blaylock, who was close to both men, seemed especially shaken. Sometime earlier, feeling the strain of riding the gunner position in the exposed front truck, he had switched places with Sergeant Wallace, moving to a Humvee at the rear.

“It was supposed to be me,” he would tell people later.

The losses followed the men and women of the 1451st home as they dispersed to North Carolina and Tennessee, New York and Oklahoma, reuniting with their families and returning to their jobs.

Sergeant Blaylock went back to Houston, where he tried to pick up the pieces of his life and shape them into a whole. But grief and guilt trailed him, combining with other stresses: financial troubles, disputes with his estranged wife over their young daughter, the absence of the tight group of friends who had helped him make it through 12 months of war.

On Dec. 9, 2007, Sergeant Blaylock, heavily intoxicated, lifted a 9-millimeter handgun to his head during an argument with his girlfriend and pulled the trigger. He was 26.

“I have failed myself,” he wrote in a note found later in his car. “I have let those around me down.”

Over the next year, three more soldiers from the 1451st — Sgt. Jeffrey Wilson, Sgt. Roger Parker and Specialist Skip Brinkley — would take their own lives. The four suicides, in a unit of roughly 175 soldiers, make the company an extreme example of what experts see as an alarming trend in the years since the invasion of Iraq.

The number of suicides reported by the Army has risen to the highest level since record-keeping began three decades ago. Last year, there were 192 among active-duty soldiers and soldiers on inactive reserve status, twice as many as in 2003, when the war began. (Five more suspected suicides are still being investigated.) This year’s figure is likely to be even higher: from January to mid-July, 129 suicides were confirmed or suspected, more than the number of American soldiers who died in combat during the same period.

Those statistics, of course, do not offer a full picture. Suicide counts tend to be undercounts, and the trend is less marked in other branches of the military. Nor are there reliable figures for veterans who have left the service; the Department of Veterans Affairs can only systematically track suicides among its hospitalized patients, and it does not issue regular suicide reports.

Even so, stung by criticism from veterans groups and mental health advocates, the Pentagon and the veterans agency have increased efforts to understand and address the problem. They have bolstered suicide-prevention programs, hiring hundreds more mental health providers. At Fort Campbell, in Kentucky, where at least 14 soldiers have killed themselves this year alone, normal activities were suspended for three days in May and replaced with suicide-prevention training. Late last year, the Army commissioned a five-year, $50 million study of the causes of suicide among soldiers, turning to four outside experts to lead the research.

“The ‘business as usual’ attitudes of the past are no longer appropriate,” said George Wright, an Army spokesman. “It’s clear we have not found full solutions yet, but we are trying every remedy.”

Born in the USA — Leonard Pitts, Jr. on the birther problem.

Yours truly lacks the acumen to calculate how stupid you’d have to be to believe there is a shred of a shred of a piece of a fraction of validity to their claim. With the untold fortune Hillary Clinton, John McCain and others spent researching Obama, we’re supposed to believe it took Orly Taitz to dig out this bombshell? And what of the birth announcements in two Honolulu newspapers, heralding Obama’s arrival? Did he send somebody back to ’61 in a time machine to plant them?

Last month, GOP Rep. Mike Castle was booed and shouted down at a town hall meeting because he dared vouch that the president is a citizen. If I were of that endangered species, the thoughtful conservative, I would find that deeply troubling.

And I’ll save you the trouble: No, the left is not free of lunacy. Somewhere out there, somebody still thinks George W. Bush had the Pentagon bombed on Sept. 11. But the Democrats usually keep their loons off to the side where they are pandered to, yes, but not allowed to run the show. For Republicans, though, lunacy has become the show, a circus of extremism that now defines them. In it, Obama is an undocumented worker, Sonia Sotomayor is a Klanswoman, Saddam Hussein green-lighted the Sept. 11 attacks, and no one dares dissent for fear of the great and powerful Rush.

For a generation, the GOP has tolerated and encouraged this estrangement from reality because it played well at the ballot box. Rep. Castle’s experience suggests the cost may now outstrip the benefits. Because the cost is the specter of a party rendered ridiculous — and irrelevant.

You have to ask yourself: How far from reality can you wander before you can’t find your way home again? If conservatives aren’t careful, they may soon find out.

Fins Fans — From the days when cars were styled, not engineered.

THE 1950s had to end sometime, and in Detroit the soaring tailfins of 1959 models put an exclamation point at the conclusion of an exuberant decade of unchecked optimism.

Inspired by aircraft of the 1940s, tailfins inched upward through the ’50s to reach their zenith on the 1959 Cadillac. That car and many others presented a comic-book vision of travel — over the earth and through space — that was to evolve in the early ’60s into less fanciful designs more attuned to the actual spacecraft that were by then putting Americans into orbit.

“Tailfins embodied a feeling of prosperity and jet-age excitement,” said Jeffrey Leestma, president of the Automotive Hall of Fame here. Last weekend the Hall of Fame made tailfins the theme of its annual classic car show, which included 40 models.

This Sunday, another collection of fins will command attention at the Meadow Brook Concours d’Élégance in Rochester Hills, Mich. A display called “Fins and Chrome: The Convertibles of 1959” will feature 14 models, including one of each of the Big Three’s car lines.

“General Motors and Chrysler became involved in a game of one-upmanship in fins,” Mr. Leestma said. “And they grew to a huge extent by 1959. By 1963 or so they were completely gone.”

The cars set into the ground at the Cadillac Ranch near Amarillo, Tex., chart the growth of the fins that sprouted on ’48 Cadillacs. Harley Earl, the legendary G.M. designer, was inspired by the sight of a twin-tail P-38 fighter plane during World War II. It was a symbolic moment: a spark of inspiration passed from one of America’s greatest practical designers, Kelly Johnson of Lockheed, to Earl, the man who brought Hollywood glitz to Detroit.

Tailfins gave customers an “extra receipt for their money in the form of a visible prestige marking,” Earl said. Fins moved down the G.M. line from Cadillac to the iconic 1957 Chevrolet. But by the late ’50s G.M. had made plans to trim its fins even as Virgil Exner, the top Chrysler designer, pushed them to new heights with his Forward Look.

A G.M. designer largely responsible for the flamboyant ’59 Cadillac, Chuck Jordan, recalled how Chrysler’s 1957 cars influenced the G.M. models that followed. In interviews, he has recalled driving to a Chrysler factory where he stared at rows of big-finned Plymouths.

In a 2006 interview with Motor Trend, he said: “I’m looking through the fence and all I could see were fins, fins, fins. And I thought, ‘Wow!’”

Click here for a stroll through automotive Memory Lane.