President Obama wants to tell school children to set goals and study hard, and the conservatives go nuts: “He’s trying to indoctrinate our children with his socialist agenda!” and instill a cult of personality around him.

Well, they should know all about developing a cult of personality: 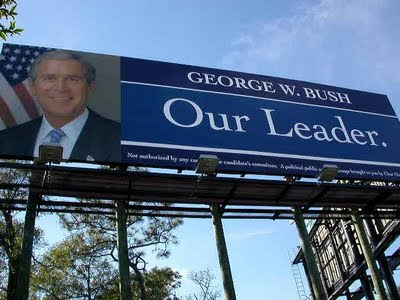 Glenn Greewald reminds us of Monica Goodling, the deputy at the Bush administration’s Department of Justice who interviewed potential employees with questions like:

[W]hat is it about George W. Bush that makes you want to serve him?

Aside from the President, give us an example of someone currently or recently in public service who you admire.

Or this exchange with DOJ aide Sara Taylor before the Senate Judiciary Committee:

“I took an oath to the president, and I take that oath very seriously,” Sara Taylor said in answer to a question early in the hearing.

And right after a break, Sen. Patrick Leahy (D-VT) asked her if she was sure about that. “Did you mean, perhaps, you took an oath to the Constitution?” Leahy asked. It was a telling exchange.

And of course there were the “public meetings” hosted by the Bush White House where attendees were required to sign loyalty oaths or risked expulsion for arriving in a car without the appropriate bumper sticker.

But let President Obama speak to school children? Oh, the horror, the horror.

As Mr. Greenwald points out in his post, it is possible that some people on the right were unaware of the cottage industry that was built up around the aura of George W. Bush, including those who claim that God had a hand in electing him as our leader during those perilous times, or the shelves of books that were written about him that turned him into the Warrior Prince. If so, I’m relieved that they have recovered from their eight-year coma and wish them a speedy recovery.