Perhaps the healthcare reform bills making their way — however awkwardly — through the legislative process should contain provisions for research into short-term memory loss. It seems to be a rampant problem in the GOP.

At a press conference on Rep. Jack Kingston’s (R-Ga.) anti-”czar” legislation, Rep. John Shadegg (R-Ariz.) held up a chart of 34 “czars” in the administration.

“I don’t think you know who these people are,” said Shadegg, ribbing the media for not holding them “accountable.”

But several of the people in Shadegg’s chart were actually confirmed by the Senate. So-called “Science Czar” John Holdren — second row, third from right — was confirmed unanimously as Director of the White House Office of Science and Technology Policy, way back in March. So-called “Regulatory Czar” Cass Sunstein–fourth row, second from the left — was confirmed as the next administrator of the White House Office of Information and Regulatory Affairs by a 57-40 vote, just last week. So-called “TARP Czar” Herb Allison and so-called “technology czar” Aneesh Chopra have been confirmed the Senate. Shadegg even lists Director of National Intelligence Dennis Blair, who was confirmed by the Senate a week after Inauguration Day, as the “Intelligence Czar.”

Minutes after Shadegg showed this chart, Rep. Marsha Blackburn (R-Tenn.) admitted that there were “10 czars who have been confirmed by the Senate.” 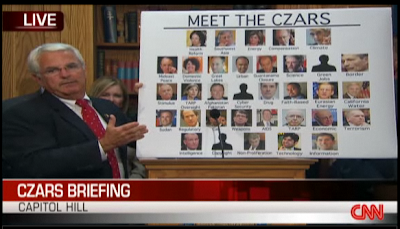 Sen. Lamar Alexander (R-TN) also thinks that czars are a terrible abuse of the Constitution… now. But he was in favor of them during the Bush administration. What could possibly have happened to make him change his mind?

(The funniest part, though, was hearing reports about protesters at last weekend’s Teabagger’s Festival in Washington, D.C. accusing President Obama of being a communist because he was appointing all these czars; after all, “czar” is a Russian word, so you know it has to be commie. Well, someone needs to go back to school and study a little bit of history, since it was the Bolsheviks — the Communists — who overthrew Czar Nicholas II in the Russian Revolution of 1917. Some child got left behind.)

And then there’s former Sen. Rick Santorum (R-PA), best remembered for his vision of man-on-dog sex, who thinks that the Democrats’ plan to push through the healthcare bill via reconciliation is unconscionable despite the fact that the Republicans used reconciliation — and he supported it — when they were in power for such things as the Bush tax cuts and drilling for oil in Alaska.

Santorum tried to name every way he could think of that might justify his position, including: 1) unlike health care, a tax bill is a “revenue bill” and “affects the budget,” 2) health care is “major policy initiative,” and 3) the reconciliation process will make a “huge and complex” bill even “more complex.”

When [Politico’s Ben] Smith pointed out that Republicans used the reconciliation process to push through drilling in the Arctic National Wildlife Refuge — which is also arguably a major policy initiative that isn’t just a revenue bill — Santorum tried to argue that it wasn’t AS major, so it was acceptable:

SANTORUM: Well, again, you’re talking about a situation where, again, the biggest thing about drilling is certainly it has an impact on a small chunk of land in northern Alaska, and it has an impact on the federal revenue, but it’s not a particularly complex thing. You’re talking about drilling holes, as opposed to rejiggering and rewriting and reconstructing the entire health care system of this country. And the impact on the 350 million Americans for drilling a few holes in Alaska is fairly minor, as far as how it affects their daily lives. As opposed to — and by the way, it’s fairly minor on the economy, certainly in the short term, a little more in the long term. But again, nothing compared to what we’re talking about here with health care.

Get some standards, people, and make it a double.