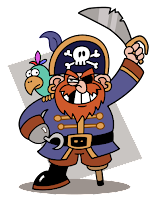 International Talk Like a Pirate Day (ITLAPD) is a parodic holiday created in 1995 by John Baur (Ol’ Chumbucket) and Mark Summers (Cap’n Slappy), of Albany, Oregon, who proclaimed September 19 each year as the day when everyone in the world should talk like a pirate. For example, an observer of this holiday would greet friends not with “Hello,” but with “Ahoy, me hearty!” The holiday, and its observance, springs from a romanticized view of the Golden Age of Piracy. The holiday is a major observance in the parody religion of the Flying Spaghetti Monster.

One of the most influential books on popular notions of pirate speech was Treasure Island, a novel by Robert Louis Stevenson, from which sample quotes include:

* “Bring me one noggin of rum, now, won’t you, matey.”
* “Avast, there!”
* “Dead men don’t bite.”
* “Shiver my timbers!” (often pronounced as “Shiver me timbers!”)
* “Fifteen men on a dead man’s chest — Yo-ho-ho, and a bottle of rum!”
* “There! That’s what I think of ye. Before an hour’s out, I will stove in your old block house like a rum puncheon. Laugh, by thunder, laugh! Before an hour’s out, ye’ll laugh upon the other side. Them that die’ll be the lucky ones.”
* “Have I lived this many years, and a son of a rum puncheon cock his hat athwart my hawse at the latter end of it?”

The archetypal pirate grunt “Arrr!” (alternatively “Rrrr!” or “Yarrr!”) first appeared in the classic 1950 Disney film Treasure Island, according to research by Mark Liberman. His article cites linguistic research that may locate the roots of this phrase much earlier.

Robert Newton made a career out of talking like a pirate: