Students in South Florida who saw the president speak yesterday were “inspired” by him. 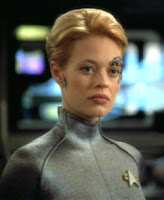 Kids interviewed by The Miami Herald called the speech inspiring and seemed incredulous that the 15-minute talk had sparked such outrage nationally.

”I don’t see what’s wrong with him coming and talking to the kids, trying to give them responsibility and direct them in the right way,” said 11-year-old Chanelle Missick, a Pines Middle School seventh-grader.

In Miami-Dade County, as in Palm Beach and Monroe counties, parents had the option to keep their children from watching the address.

At Miami Beach Senior High, the teenagers in Ken Spiegelman’s law studies class were eager to hear Obama’s noontime address to students. They grew quiet as their teacher dimmed the lights and projected the president’s image onto the smart board.

”He’s so awesome,” one girl whispered after Obama took the stage.

Ah, we’ve got them now. Resistance was futile. They have been assimilated. Soon they will become part of the Collective.