Return to Agincourt — Historians are thinking that the battle that took place 594 years ago today and made famous in Henry V didn’t happen exactly the way Shakespeare depicted it. 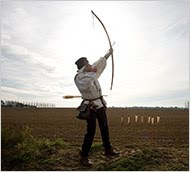 The heavy clay-laced mud behind the cattle pen on Antoine Renault’s farm looks as treacherous as it must have been nearly 600 years ago, when King Henry V rode from a spot near here to lead a sodden and exhausted English Army against a French force that was said to outnumber his by as much as five to one.

No one can ever take away the shocking victory by Henry and his “band of brothers,” as Shakespeare would famously call them, on St. Crispin’s Day, Oct. 25, 1415. They devastated a force of heavily armored French nobles who had gotten bogged down in the region’s sucking mud, riddled by thousands of arrows from English longbowmen and outmaneuvered by common soldiers with much lighter gear. It would become known as the Battle of Agincourt.

But Agincourt’s status as perhaps the greatest victory against overwhelming odds in military history — and a keystone of the English self-image — has been called into doubt by a group of historians in Britain and France who have painstakingly combed an array of military and tax records from that time and now take a skeptical view of the figures handed down by medieval chroniclers.

The historians have concluded that the English could not have been outnumbered by more than about two to one. And depending on how the math is carried out, Henry may well have faced something closer to an even fight, said Anne Curry, a professor at the University of Southampton who is leading the study.

Those cold figures threaten an image of the battle that even professional researchers and academics have been reluctant to challenge in the face of Shakespearean prose and centuries of English pride, Ms. Curry said.

Shakespeare himself would be the first to say that his “history” plays were anything but historically accurate, any more than any of the other dramas before or since accurately told the story of what happened on a battlefield or within a king’s castle. And even if the truth is that Agincourt was not much more than an even skirmish, it is still a setting for a story of courage and the humble awareness of a king suddenly given a tremendous burden and his rising to the task.

From this day to the ending of the world,
But we in it shall be remember’d;
We few, we happy few, we band of brothers;
For he to-day that sheds his blood with me
Shall be my brother; be he ne’er so vile,
This day shall gentle his condition:
And gentlemen in England now a-bed
Shall think themselves accursed they were not here,
And hold their manhoods cheap whiles any speaks
That fought with us upon Saint Crispin’s day.

More Real History — Doug Saunders of The Globe and Mail looks at what really led to the downfall of communism and debunks some of the myths.

Archie Brown, the Scottish historian of the Eastern Bloc known for his pioneering work with declassified Soviet archives, has just published a massive and significant work titled The Rise and Fall of Communism, full of lessons that are worth hearing today.

The primary myth is the one that holds that the West, and particularly Ronald Reagan’s United States, caused the Communist bloc to collapse through a Cold War policy of confrontation and isolation.

By this account, Mr. Reagan drove the Eastern Bloc into unconditional surrender by declaring the Soviet Union an “evil empire” in 1983, madly escalating the nuclear-arms count, launching “Star Wars” missile-defence networks and shouting, “Mr. Gorbachev, tear down this wall,” in Berlin in 1987.

“This,” Mr. Brown says, “is a kind of triumphalist view … which I think is very misleading.”

In fact, there is now a near-consensus among historians that Mr. Reagan’s policies not only failed to end the Cold War, but probably prolonged it for several years beyond its likely end date, by propelling the most reactionary Communists into power.

“The more belligerent the United States became, in terms of Reagan’s rhetoric and in terms of arms buildup, the stronger the hard-liners became in Moscow,” Mr. Brown says.

“Whenever the Cold War became colder, the most militant Communists, the KGB and the military-industrial complex within the Soviet Union became stronger.”

In fact, the collapse of communism was probably made possible, and certainly rendered peaceful and non-violent, by quite another set of Western policies – the kinds of policies that are finally being revisited today as an alternative approach to such authoritarian governments as those of Iran, Myanmar and North Korea.

Does it really matter who gets the credit for ending the Cold War and bringing an end to the communist dictatorships? As long as it’s over and gone, not really.

Stardom has undergone a perverse democratization. Where once it was the prize awarded a lucky few who earned it through rigorous honing of natural vocal ability, comedic timing, dramatic talent, terpsichorean prowess, it is now regarded as something anyone can have.

Journalism, curiously enough, has undergone a similar process. In a development that must grate any reporter still paying off his J-School loans, it has increasingly become the province of so-called ”citizen journalists” and ”iReporters.”

Likewise, natural talent and the honing thereof are increasingly disconnected from stardom. These days, all it takes is the willingness to be rude, crude, lewd — or nude, on camera. All it takes is proximity to scandal, a bizarre video posted on YouTube, a willingness to live some caricature of one’s real life for public consumption. All it takes is a complete lack of personal borders, self-awareness or ability to be embarrassed.

Heck, Levi Johnston has a modeling gig and a TV commercial and all he did was knock up his girlfriend. Paris Hilton has a marketing empire and all she did was have sex on tape. Kim Kardashian has a TV show and a product line, and all she does is exist.

If authorities are correct, then, the heinous Heenes are simply avatars of the new zeitgeist. Indeed, it might be argued that in an era where everybody is a star, the only true weirdo is the person content to live his life quietly beyond the reach of cameras.

Seen in that light, one can hardly blame the Heenes if they did what authorities say, if Richard and his wife Mayumi — both actors — concocted the balloon stunt as a means of making themselves famous. They once appeared on ABC’s ”reality” show, Wife Swap, and Richard has been described by at least one associate as obsessed with bizarre ideas designed to bring the family fame.

Frank Rich also has some thoughts on the saga of the boy hiding out in the attic.