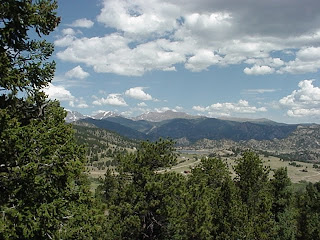 Estes Park, Colorado, is in a beautiful part of the state; it’s the gateway to Rocky Mountain National Park, and it is surrounded by some incredible natural wonders, including the Mummy Range (see the picture) and Longs Peak to the south. I spent ten happy summers in the vicinity working at a summer camp. For a long time it was my adopted home town — it was where I registered my car when I first moved to Colorado in 1982, and I had an account at the local bank for years after I left. It is a tourist attraction, too, with a vibrant downtown of shops, restaurants, and a mix of good — one of the best bookstores I know — and the kitsch — Ripley’s had a “Believe It or Not” museum across the street. It also has The Wheel, one of the better bars and steakhouses in the state. Rumor has it that when they were filming Centennial up there in the 1970’s, Robert Conrad would engage in regular bar-clearing brawls.

It’s also seen its share of tough times. The economy of the town relies on tourism, and when there’s a recession, people aren’t as likely to drive 75 miles from Denver into the mountains to spend the day, even if they are on their way to the national park. And they’ve had their share of natural disasters, too. In 1976, the Big Thompson flood killed over 140 people in the canyon downstream of the town, and although the town itself wasn’t damaged, it served as the base for rescue operations (including those of us who were tangentially involved in getting our kids safe). Six years later, the Lawn Lake dam collapse sent billions of gallons of water roaring down Elkhorn Avenue, taking nearly half of the business district with it. Yesterday the town faced another disaster. This time a fire took out the Park Theatre Mall in the center of the business district. Fortunately there were no fatalities reported, but it’s yet another blow, especially at the end of a summer that was not the best.

It takes a certain amount of toughness and strength to live at 7,000 feet, so I know the people of the town will pull together as they always have. They will make the town even better, and I am looking forward to going back and playing another game of table curling at The Wheel.