Florida’s reputation as a fun, if not slightly crazy, place for politics and voting is well-earned, and now it’s going to get even madder. 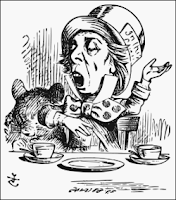 A Florida conservative has registered an official “Tea Party” with the office of the Secretary of State, and is promising to run candidates against Republicans and Democrats in state and national races.

“The current system has become mired in the sludge of special interest money that seeks to control the leadership of both parties. It’s time for real change,” says Orlando lawyer Frederic O’Neal, the new party’s chairman, who couldn’t be reached immediately by phone, in a press release.

A spokeswoman for the Florida Secretary of State, Jennifer Davis, said the party had registered in August, and that its qualified candidates will appear on the ballot in the state.

O’Neal compared his party’s role to that of the Conservative Party in New York’s 23rd District. Florida, however, lacks the “fusion” rules that has allowed third parties in New York to amass influence by offering their ballot line to acceptable major-party candidates.

It’s unclear if O’Neal, who has represented high-profile tax protesters, has the wherewithal to organize a movement that prides itself on spontaneity and existing outside party structures.

The Tea Party will become one of 32 minor political parties certified by the state, including also the Real Food Party of the United States of America, the Prohibition Party, and the Florida Socialist Workers Party.

What, no Surprise Party? (Well, actually that was Gracie Allen’s shtick.)

The more the merrier, I always say, and while these folks are most assuredly going to get a lot of media attention, I kind of doubt that they’re going to pull in the votes any more than other minor parties that spring up during an election season. Even if they field candidates in state races, getting beyond being on the ballot is highly unlikely.

It’s not because there’s some vast conspiracy to keep third and fourth parties out of the races; in Florida, getting a party going isn’t that tough. But it’s like starting any business; you need a lot of capital to get going, you need a distribution network, and you need a product that people are willing to buy instead of going with what they’re used to. In this case the Tea Party is going to be putting out candidates who are going to be perceived as even more conservative than the current crop of Republicans running in Florida, and that’s saying a lot.

And then there’s the image problem; the imprint of the tea-baggers now is a bunch of angry people carrying signs of Obama=Hitler and shouting down their congressional representatives at astroturfed rallies. Getting over the crazy factor isn’t going to be easy… assuming that they want to in the first place.