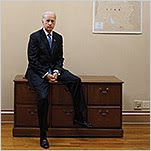 After Cheney — The role of the vice president changed — for good or for ill, depending on your point of view — with Dick Cheney. Now that Joe Biden is in the office, James Traub of the New York Times looks at the man and the job and the role he plays in the Obama administration.

As senators, Barack Obama and Joe Biden were far from close. Obama served on the Foreign Relations Committee, which Biden led; and Biden, who felt that he had earned his stars the old-fashioned way, bristled at Obama’s status as instant superstar. “They started out pretty far apart,” a Biden aide says. They went on to run against each other for the Democratic nomination for the presidency; before Biden dropped out of the race he criticized Obama as a foreign-policy neophyte who was copying his ideas. Brian Katulis, a national-security expert at the Center for American Progress, recalls encountering Biden wandering around the executive-suite floor in the Marriott Hotel in Islamabad late one night in February 2008, looking for someone to talk to. Biden invited Katulis and a visiting former congressman down to the hotel restaurant for a milkshake, and then delivered a 90-minute monologue, the essence of which was: “I know more about foreign policy than any of the other candidates in the race, and I’m going to devote the next six months to rewriting Democratic foreign policy.”

Biden said he believed — and still believes — that he would make a very good president. He was nervous about accepting Obama’s offer of the vice presidency, fearing that he would suffer a loss in status, and in voice, from his role as a Senate baron. According to John Podesta, a former official in the Clinton White House who ran Obama’s transition, Biden “had a fairly clear sense in his own mind, which probably existed even before he was selected by Obama but definitely in the weeks in advance of and right after the election, that he didn’t want to be the guy in charge of x portfolio.” Instead, Biden wanted the role every vice president wants, but which perhaps only his predecessor, Dick Cheney, had enjoyed: to be the last voice in the room.

The president and the vice president are very different men both temperamentally and generationally, and they move in different social circles. “Everyone wants this to be some kind of buddy movie — ‘Butch Cassidy and the Sundance Kid,’ ” as one senior White House official, who asked not to be named so he could speak freely, put it. “Presidents and vice presidents are never close friends. It’s a working relationship; it’s more like the C.E.O. and the chairman of the board.”

“War” on Trial — Andrew P. Napolitano, a former judge of the Superior Court of New Jersey, is the senior judicial analyst at the Fox News Channel. In an op-ed in the Los Angeles Times, he makes the case for trying terror suspects in civilian courts rather than military tribunals. For one thing, the Constitution requires it.

In the uproar caused by Atty. Gen. Eric H. Holder Jr.’s announcement that the alleged planners of the 9/11 attacks are to be tried in U.S. District Court in New York City, and the suspects in the attack on the U.S. destroyer Cole will go on trial before military tribunals at Guantanamo Bay, Cuba, the public discourse has lost sight of the fundamental principles that guide the government when it makes such decisions. Unfortunately, the government has lost sight of the principles as well.

When President George W. Bush spoke to Congress shortly after 9/11, he did not ask for a declaration of war. Instead, Republican leaders offered and Congress enacted an Authorization for the Use of Military Force. The authorization was open-ended as to its targets and its conclusion, and basically told the president and his successors that they could pursue whomever they wanted, wherever their pursuits took them, so long as they believed that the people they pursued had engaged in acts of terrorism against the United States. Thus was born the “war” on terror.

Tellingly, and perhaps because we did not know at the time precisely who had planned the 9/11 attacks, Congress did not declare war. But the use of the word “war” persisted nonetheless. Even after he learned what countries had sponsored terrorism against us and our allies with governmental assistance, Bush did not seek a declaration of war against them. Since 9/11, American agents have captured and seized nearly 800 people from all over the globe in connection with the attacks, and now five have been charged with planning them.

The framers of the Constitution feared letting the president alone decide with whom we are at war, and thus permitting him to trigger for his own purposes the military tools reserved for wartime. They also feared allowing the government to take life, liberty or property from any person without the intercession of a civilian jury to check the government’s appetite and to compel transparency and fairness by forcing the government to prove its case to 12 ordinary citizens. Thus, the 5th Amendment to the Constitution, which requires due process, includes the essential component of a jury trial. And the 6th Amendment requires that when the government pursues any person in court, it must do so in the venue where the person is alleged to have caused harm.

Numerous Supreme Court cases have ruled that any person in conflict with the government can invoke due process — be that person a citizen or an immigrant, someone born here, legally here, illegally here or whose suspect behavior did not even occur here.

Think about it: If the president could declare war on any person or entity or group simply by calling his pursuit of them a “war,” there would be no limit to the government’s ability to use the tools of war to achieve its ends. We have a “war” on drugs; can drug dealers be tried before military tribunals? We have a “war” on the Mafia; can mobsters be sent to Gitmo and tried there? The Obama administration has arguably declared “war” on Fox News. Are Glenn Beck, Bill O’Reilly and I and my other colleagues in danger of losing our constitutional rights to a government hostile to our opinions?

I trust not. And my trust is based on the oath that everyone who works in the government takes to uphold the Constitution. But I am not naive. Only unflinching public fidelity to the Constitution will preserve the freedoms of us all.

Snowe Games — Steve Coll at The New Yorker has a suggestion on how to get to 60 votes for the healthcare bill.

Phase One: Reflect deeply on what Maine needs. A particle accelerator? A jobs-creating air-defense headquarters for Northern Command, to guard against possible Icelandic air force depredations? New Coast Guard facilities, to protect our shores from unscrupulous Malaysian fishing trawlers? Simultaneously, inventory and review all of the Connecticut earmarks for Homeland Security spending put through by Senator Lieberman during the time the Democratic Party has indulged his tenure as chairman of the Homeland Security Committee. Consider in particular how spending now located in Connecticut by Lieberman’s patronage might be relocated to Maine, and redoubled in scale—all for the good of the citizenry and the improved defense of the nation, of course.

Phase Two (overlapping): Negotiate simultaneously but separately with Lieberman and Snowe about how far they will go to accommodate the Obama Administration’s vision of the final health-reform bill, particularly on the public option. Skillfully but carefully introduce to Snowe a conditional vision of Maine’s rewards. Suggest more explicitly than ever that she leave the Republican Party, become an Independent, caucus with the Democrats, and reap during 2010, at least, something on the order of thirty per cent more political and patronage reward than has been available to Lieberman.

Phase Three: If Snowe agrees to an acceptable public-option provision, immediately stop negotiating with Lieberman and go to the Senate floor with a bill. Let him vote no. Afterward, return to him humbly, soliciting his wish list. Flatter and negotiate with him during the treacherous conference phase that follows. Take care to hold Snowe close; reach out to Collins.

When the final bill is passed, with some public option intact, graciously invite Lieberman to the White House signing ceremony. All the while, think about when and at what restaurant, over what vintage, Harry Reid wishes to deliver the news to Lieberman that, with the challenges ahead in 2010, the Senate’s Democratic caucus has decided to move on; Lieberman’s service as a committee chairman (for which his colleagues all remain grateful and admiring, etc.) will no longer be required.