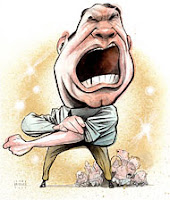 On paper, Representative Alan Grayson, a freshman Democrat from Florida, seems a bit stiff: degrees from Harvard and Harvard Law; a résumé that includes clerking for the United States Court of Appeals under Judges Antonin Scalia, Ruth Bader Ginsburg and Robert Bork; an advocate for the aging.

But in recent weeks, Mr. Grayson has catapulted himself to national renown for outlandish rhetoric and a pugilistic political style that makes him seem less staid lawmaker than a character on the lam from one of his Orlando district’s theme parks.

First it was his comment, “If you get sick, America, the Republicans’ health care plan is this: Die quickly.” Then, appearing on MSNBC, he said of former Vice President Dick Cheney: “I have trouble listening to what he says sometimes because of the blood that drips from his teeth while he’s talking.” Finally, a radio interview surfaced in which he had called a female adviser to the Federal Reserve chairman “a K Street whore” — a reference to her former job as a Washington lobbyist. That one forced him to make a formal apology.

Mr. Grayson could be the latest incarnation of what in the American political idiom is known as a wing nut — a loud darling of cable television and talk radio whose remarks are outrageous but often serious enough not to be dismissed entirely. Mr. Grayson is the more notable because he hurls his nuts from the left in a winger world long associated with the right.

That might just be the point. House Democratic leaders publicly frown on his behavior and have urged him to tone it down, saying he contributes to an atmosphere of incivility. But the incivility is no accident; nor is the bluster. Such antics are often quickly rewarded in the media-crazed wrestling pit of American politics. One talked-about TV appearance leads to three more; every quotable outburst is a potential pitch, spread instantly by YouTube and blogs to an eager audience that can cheer by way of campaign donations made with the click of a mouse.

Some Democrats also say that Mr. Grayson fills a void, defying their party’s inferiority complex, the constant sense that liberals just are not tough enough. They say that as an attention-grabbing motivator of the party’s base, he could prove hugely useful in getting out the message for next year’s midterm elections.

“There is always a feeling among liberals, a psychology that we are too apologetic; we see six sides to the Pentagon,” said James Carville, the Democratic operative and commentator, who met Mr. Grayson in a CNN studio shortly after the “die quickly” speech in Congress.

“He was smart; he’s not just a crank,” Mr. Carville said. “He wanted to be anything but an apologetic, ‘if I said anything that offended anybody’ kind of liberal.” Mr. Carville added that party leaders will view Mr. Grayson as a “torpedo” they can deploy, especially if Democrats lose important governors’ races this week.

“We need guys like that out there,” he said.

Not everyone thinks so. Mr. Grayson joins colleagues like Michele Bachmann, Republican of Minnesota; Pete Stark, Democrat of California; and Joe Wilson, Republican of South Carolina, in what the decorum-minded see as a bipartisan playpen reserved for political problem children. So for party leaders, the behavior often forces a question: Do you cheer, or wince, or both?

Frank Rich on the lurch to the right of the GOP.

The more rightists who win G.O.P. primaries, the greater the Democrats’ prospects next year. But the electoral math is less interesting than the pathology of this movement. Its antecedent can be found in the early 1960s, when radical-right hysteria carried some of the same traits we’re seeing now: seething rage, fear of minorities, maniacal contempt for government, and a Freudian tendency to mimic the excesses of political foes. Writing in 1964 of that era’s equivalent to today’s tea party cells, the historian Richard Hofstadter observed that the John Birch Society’s “ruthless prosecution” of its own ideological war often mimicked the tactics of its Communist enemies.

The same could be said of Beck, Palin and their acolytes. Though they constantly liken the president to various totalitarian dictators, it is they who are re-enacting Stalinism in full purge mode. They drove out Arlen Specter, and now want to “melt Snowe” (as the blog Red State put it). The same Republicans who once deplored Democrats for refusing to let an anti-abortion dissident, Gov. Robert Casey of Pennsylvania, speak at the 1992 Clinton convention now routinely banish any dissenters in their own camp.

These conservatives’ whiny cries of victimization also parrot a tic they once condemned in liberals. After Rush Limbaugh was booted from an ownership group bidding on the St. Louis Rams, he moaned about being done in by the “race card.” What actually did him in, of course, was the free-market American capitalism he claims to champion. Limbaugh didn’t understand that in an increasingly diverse nation, profit-seeking N.F.L. franchises actually want to court black ticket buyers, not drive them away.

This same note of self-martyrdom was sounded in a much-noticed recent column by the former Nixon hand Pat Buchanan. Ol’ Pat sounded like the dispossessed antebellum grandees in “Gone With the Wind” when lamenting the plight of white working-class voters. “America was once their country,” he wrote. “They sense they are losing it. And they are right.”

They are right. That America was lost years ago, and no national political party can thrive if it lives in denial of that truth. The right still may want to believe, as Palin said during the campaign, that Alaska, with its small black and Hispanic populations, is a “microcosm of America.” (New York’s 23rd also has few blacks or Hispanics.) But most Americans like their country’s 21st-century profile

Michelle Malkin proves Mr. Rich’s point by crowing that the “mainstream conservatives have asserted themselves” by driving Ms. Scozzafava out of the race in the NY 23rd district race. If Mr. Hoffman, the animatronic Club for Growth conservative who does not live in the district and is unfamiliar with the issues facing the people there, is “mainstream,” then the GOP is in for an interesting couple of election cycles, and not in a good way for them.

Piecing Together History — Twenty years after the fall of the Berlin Wall, historians are trying to reassemble records from East Germany’s secret police.

Martina Metzler peers at the piles of paper strips spread across four desks in her office. Seeing two jagged edges that match, her eyes light up and she tapes them together.

“Another join, another small success,” she says with a wry smile — even though at least two-thirds of the sheet is still missing.

Metzler, 45, is a “puzzler,” one of a team of eight government workers that has attempted for the last 14 years to manually restore documents hurriedly shredded by East Germany’s secret police, or Stasi, in the dying days of one of the Soviet bloc’s most repressive regimes.

Two decades after the heady days when crowds danced atop the Berlin Wall, Germany has reunited and many of its people have moved on. But historians say it is important to establish the truth about the Communist era, and the work of the puzzlers has unmasked prominent figures in the former East Germany as Stasi agents. In addition, about 100,000 people annually apply to see their own files.

The Stasi, which is said to have had more than 170,000 informers, succeeded in destroying thousands of files, shredding them in machines called “ripping wolves” until the equipment broke down under the weight of the task, then through burning and pulping (the contents, held in buckets in the archive, are known as “Stasi porridge”). At the end, agents tore them by bare hand as the teeming crowds smashed down their doors.

The shredded files, which any good German bureaucrat knows as vorvernichtete Akten or pre-destroyed files — fill a staggering 16,000 mail sacks that contain about 45 million individual pages, or 600 million scraps. Thus far, the puzzlers are 440 sacks into the process.

“If we carry on at this pace we’ll still be here in 500 years’ time,” says Ernst Schroedinger, a 54-year-old former amateur boxer turned puzzler.