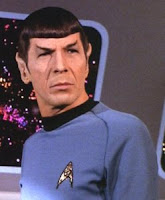 As pundit assessments go, John F. Harris’s take-down on President Obama in Politico is somewhat predictable — he’s a pushover, he’s not an American exceptionalist, he’s arrogant, etc. etc. — and there are a few nuggets of truth in there. But where he goes off the track is when he gets into psychological analysis and merges with popular culture.

Too much Leonard Nimoy

People used to make fun of Bill Clinton’s misty-eyed, raspy-voiced claims that, “I feel your pain.”

The reality, however, is that Clinton’s dozen years as governor before becoming president really did leave him with a vivid sense of the concrete human dimensions of policy. He did not view programs as abstractions — he viewed them in terms of actual people he knew by name.

Obama, a legislator and law professor, is fluent in describing the nuances of problems. But his intellectuality has contributed to a growing critique that decisions are detached from rock-bottom principles.

Both Maureen Dowd in The New York Times and Joel Achenbach of The Washington Post have likened him to Star Trek’s Mr. Spock.

For one thing, Leonard Nimoy is not Spock, as he has taken great pains (and a book) to explain the differences between being an actor and a character he’s identified with. When Mr. Harris confuses the two, he confounds the comparison. (By the way, Mr. Nimoy is described by friends and fans as caring and compassionate about political issues, including Israel.)

Second, since when is it a problem to have a president who is guided by rational thought as opposed to going with gut feelings?

Third, if you’re going to make comparisons to TV characters, who would you rather have as president: Spock or Bart Simpson?