Sold Out — Matt Taibbi at Rolling Stone says that President Obama is in the thrall of Wall Street.

Barack Obama ran for president as a man of the people, standing up to Wall Street as the global economy melted down in that fateful fall of 2008. He pushed a tax plan to soak the rich, ripped NAFTA for hurting the middle class and tore into John McCain for supporting a bankruptcy bill that sided with wealthy bankers “at the expense of hardworking Americans.” Obama may not have run to the left of Samuel Gompers or Cesar Chavez, but it’s not like you saw him on the campaign trail flanked by bankers from Citigroup and Goldman Sachs. What inspired supporters who pushed him to his historic win was the sense that a genuine outsider was finally breaking into an exclusive club, that walls were being torn down, that things were, for lack of a better or more specific term, changing.

Then he got elected.

What’s taken place in the year since Obama won the presidency has turned out to be one of the most dramatic political about-faces in our history. Elected in the midst of a crushing economic crisis brought on by a decade of orgiastic deregulation and unchecked greed, Obama had a clear mandate to rein in Wall Street and remake the entire structure of the American economy. What he did instead was ship even his most marginally progressive campaign advisers off to various bureaucratic Siberias, while packing the key economic positions in his White House with the very people who caused the crisis in the first place. This new team of bubble-fattened ex-bankers and laissez-faire intellectuals then proceeded to sell us all out, instituting a massive, trickle-up bailout and systematically gutting regulatory reform from the inside.

How could Obama let this happen? Is he just a rookie in the political big leagues, hoodwinked by Beltway old-timers? Or is the vacillating, ineffectual servant of banking interests we’ve been seeing on TV this fall who Obama really is?

Whatever the president’s real motives are, the extensive series of loophole-rich financial “reforms” that the Democrats are currently pushing may ultimately do more harm than good. In fact, some parts of the new reforms border on insanity, threatening to vastly amplify Wall Street’s political power by institutionalizing the taxpayer’s role as a welfare provider for the financial-services industry. At one point in the debate, Obama’s top economic advisers demanded the power to award future bailouts without even going to Congress for approval — and without providing taxpayers a single dime in equity on the deals.

It goes without saying that this article has generated a lot of reaction, notably from Tim Fernholz at The American Prospect, Digby at Hullabaloo, and Andrew Leonard at Salon. The point of the story, however, is that Mr. Obama campaigned as someone who promised to clean up the mess on Wall Street and ended up doing their bidding… or at least not destroying the business world. Frankly, I don’t know why anyone is surprised at both the claim and the result. This nation was founded as a capitalist society by rich white landowners who didn’t like paying taxes, and it has always been thus. Theodore Roosevelt railed against “malefactors of great wealth,” but that didn’t mean he was a complete socialist, and neither was his distant cousin who succeeded him in 1933, who also took off after the hyper-rich — and was labeled as a “traitor to his class.” There’s always been a bond — so to speak — between Wall Street and Pennsylvania Avenue. It would be momentous if we had a president who didn’t work with the financial markets and hire people who came from there, and I don’t think we’d like the results if we had one.

Betting on Betting — South Florida is hoping that upscale casinos will bring in the bucks.

An overflow crowd of 26,874 flocked to Hialeah Park’s hallowed grounds when the historic track threw open its gates Nov. 28 after an eight-year hibernation.

And yet John Brunetti, Hialeah Park’s owner, professes not to be too concerned. Racing, he says, is a ”means to an end,” a way to win permission to open a casino, a privilege doled out by the state to struggling parimutuels. The majestic Hialeah Park is following a path beaten by other South Florida tracks and frontons, businesses that have withered under competitive pressure from Indian-run gaming resorts, Internet poker and the Florida Lottery.

Can Vegas-style slots turn around the sinking fortunes of South Florida’s parimutuels? Various frontons and tracks are betting that it will. The latest is Calder Race Course, which is rushing to open an $85 million slots casino in time for the Super Bowl, taking place at adjacent Land Shark Stadium on Feb. 7.

But the results so far at establishments a step or two ahead of Hialeah and Calder are mixed, calling into question that old adage about casinos: ”The house always wins.”

Some of the parimutuel outfits’ plans to build grand gambling palaces have already been scaled back.

The Nov. 10 ribbon-cutting of Flagler Dog Track’s new Magic City Casino brought Miami’s movers and shakers to the decades-old gambling establishment, giving it a buzz not seen since the days when the Rat Pack — Frank, Deano, Sammy et al. — visited the track.

Although the new slots are still drawing gamblers, the euphoria has subsided. Revenue per machine has fallen by half since the facility’s unofficial opening in October.

”Everything is going to open with a flash,” said Marc Dunbar, a gambling expert who teaches parimutuel law at Florida State, ”but then quickly be pulled to the reality of the marketplace.” 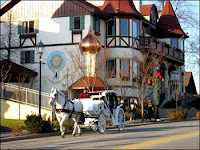 Christmas in Michigan — If you drive north of Detroit on I-75 — as I did for years — you pass the town of Frankenmuth, a touch of Bavaria in America and where Christmas lives all year around.

Here, McDonald’s advertises an indoor play “platz” rather than a playground, a storefront proudly boasts of “Michigan’s largest display of sausage,” and the official tourist Web site includes a tab for “gnomes” — a breed of small forest creatures that don’t actually exist.

It’s also a place where, come October, Main Street is festooned with fir bunting and life-size biblical figures, where sweet scents conjuring visions of sugar plums waft through the air, and where the main attraction is a massive Christmas emporium that spends $900 a day on electricity to keep its half-mile-long light extravaganza aglow.

In other words, it might well be the most spectacularly splashy Christmas destination this side of the North Pole. Coming from a family that trolled neighborhoods for the most blinding displays of the Christmas spirit, that sounded delightful to me. And I’m not alone — 3 million to 4 million annual visitors attracted by a Bavarian Christmas, or Bavarian Christmas kitsch, make the town 100 miles north of Detroit one of Michigan’s top spots for tourism.

Upon arrival, I was greeted by the metallic chime of the authentic German glockenspiel housed in the bell tower of the Bavarian Inn of Frankenmuth. There, seven times a day, the Pied Piper of Hamelin and assorted painted wooden characters parade to music and narration, first in English and then in German.

Inside the inn, which manages to combine the style of both a Swiss chalet and Neuschwanstein Castle, the music continued, thanks to a feather-capped accordion player who serenaded me while I supped on Bavarian delicacies proffered by bonneted barmaids.

Not content to merely consume Wunderbar sandwiches and the inn’s own root beer concoction in the roof garten, I roamed through racks of embroidered-leather lederhosen and a “Chillin’ with my Gnomies” garden fixture arrangement in the lodge’s byzantine shopping arcade until I came to the place that puts the kitsch in kitchen. There, in the lodge’s cooking facility, a young aproned woman showed me how to roll and shape my own pretzel, all the while telling an admittedly apocryphal story of how a German monk invented the twisted snack to teach poor children how to read.

At the nearby historical museum, with its more factual accounts, I discovered that Frankenmuth came upon its enthusiasm for all things German honestly enough. The name, meaning “courage of the Franconians,” was bestowed by a Bavarian pastor who dispatched Lutheran missionaries from the Franconia province in 1844 to populate the area and convert the Native Americans.

Making it up as they go along — Second City celebrates fifty years.

CHICAGO – On a blustery fall afternoon, Andy St. Clair slips into an empty club, with rows of tables, wooden chairs and a bare stage awaiting its next bit of comedy magic.

It doesn’t look like much, but the stage is something of a shrine.

This weekend, the theater marks its 50th anniversary, a milestone that’s even more impressive in the ephemeral world of show business. Second City has survived and thrived for a half-century with the same formula: small, youngish casts; parody, satire and improvisation; and hip, irreverent, topical, often political humor.

Decades ago, it was Alan Arkin in a rain hat and slicker phoning God — “That’s N-O-A-H,” he tells the divine — and auditioning ark candidates. Thirty years later, it was Carell (Arkin’s cast mate in “Little Miss Sunshine”) as a job applicant ordered to stomp his foot and disguise his voice so a blindfolded personnel manager can guard against biases.

From one generation to the next, Second City has cranked out talent with clockwork regularity. “It’s a comedy factory,” says Harold Ramis, a former cast member turned director-writer-actor-producer.

Now it’s Andy St. Clair’s turn. He’s at the Wells Street theater this day for rehearsals for the 97th main stage show, “The Taming of the Flu.”

Tall with a Midwestern geniality, St. Clair, 34, made it to the main stage after working his way up the ranks over six years, much like a rookie moving from the minors to a championship team. So his description of Second City is apt.

“I call it the comedy Yankees,” he says with an easy grin. “When it’s not funny, people are going to be, ‘What’s wrong with the Yankees?’ But when it is funny, they’re going to be, ‘Well, they’re SUPPOSED to be funny. They’re the YANKEES.'”

Doonesbury — sharing with the family.