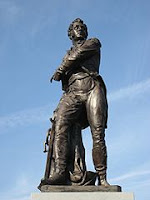 Welcome to Perrysburg, Ohio where I’m spending a little holiday time with my folks. The town is named in honor of Commodore Oliver Hazard Perry, the victor in the Battle of Lake Erie during the War of 1812. There is a monument to him in the center of town (see picture). It’s also the site of Fort Meigs, another battlefield during that war.

In spite of the attempt yesterday by someone to blow up an airliner bound for Detroit, the security inspection at Miami this morning was no different than in the past — at least as far as I could tell — and even though I was flying to Detroit, it was an uneventful flight… unless you count getting a re-run of 30 Rock and The Office as eventful.

Now that I’m here, the blogging may be a little less than usual since I’ll be spending time with my folks. It may be cold and grey outside but the surroundings are warm.