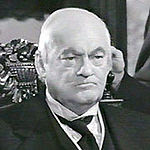 Steve Benen notes a right-wing blog that is calling out for Sen. Robert Byrd (D-WV) to drop dead.

The post was headlined “All I Want Is A Byrd Dropping For Christmas.” It added that if Byrd didn’t die, the blogger would settle: “Even a nice coma would do.”

I was also struck by the conclusion, in which “Confederate Yankee” conceded that some may be offended by such distasteful commentary. He responded:

I’d remind them that the party wheeling in a near invalid to vote in favor of this unread monstrosity of a bill is the one that should feel shame.

Except that they wouldn’t have to do that if the Republicans weren’t insisting on filibustering the bill in the first place, even after it is a foregone conclusion that they would lose.

Combined with the aforementioned Sen. Coburn and his death wishes, the GOP seems to be the party of “death panels.” And such deliberate heartlessness would make even Mr. Potter in It’s a Wonderful Life recoil in shame.