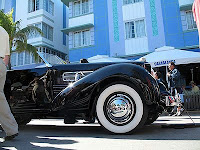 This is the annual Art Deco Weekend on Miami Beach where we celebrate the style and understated flair of architecture, autos, and appliances of the 1930’s.

One of the hallmarks of the 1930s was its passionate love affair with new technology, particularly the technology of transportation.On the sea, ocean liners like the Normandie promoted the elegance of fast transatlantic crossings, while on the rails, streamlined trains like the 20th Century Limited provided passengers with unrivaled luxury and speed. But it is on America’s roadways that a new passion became ubiquitous: the motorcar. Art Deco Weekend 2010 celebrates the technology, design, and American spirit embodied in the open road, as Americans got behind the wheel in record numbers, and manufacturers developed more and more streamlined models for mass consumption. Art Deco Weekend 2010 also celebrates the 75th anniversary of the Antique Automobile Club of America.

The Art Deco Weekend® Festival was started in 1976 by the Miami Design Preservation League to attract visitors to Miami Beach’s Art Deco Historic District and to raise awareness and appreciation of the arts and culture of the Art Deco era (approx. 1925-1945).

Art Deco Weekend will feature more than 85 events, including:

That’s where I’ll be today and tomorrow. The parade is on Saturday, Saturday night is cruise night, and Sunday is the antique auto show. I make no promises, but Billy Joel has showed up at the last three shows.