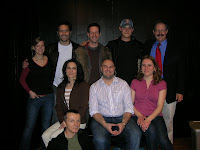 It’s official. I am now a New York-produced playwright.

The opening of Can’t Live Without You at the Manhattan Repertory Theatre was well-attended, and the production, done on a shoestring budget in a small space with limited resources, had the heart and drive of a full-tilt Broadway production. (By the way, a lot of great theatre companies, including the legendary Circle Rep, got started in spaces just like Manhattan Rep.) And when Will Poston strode out on stage as Bobby to open the play, I said to myself (and to my father sitting next to me), “That’s him. That’s Bobby.”

When the lights came up at the end of the play and I met with the cast and Adam Natale, the director, I told them that they got it; it was what I meant. Even with the occasional opening night jitters and expected bumps, the play came through and so did the characters. Yes, I was taking little notes in my head about how I can tighten things up here and there — plays are always being re-written — but now that I have actually seen and heard it, I know now what the characters are like in their full dimensions, and with their guidance, I can make it better.

As I noted in the earlier post, I was numb to all the excitement and the anticipation that this event was generating. That is, until about 5:30 tonight as I was walking to dinner with my parents and we walked through Times Square with all the lights, the signs, the theatre marquees for Mary Poppins and Young Frankenstein and all the other theatres up and down Broadway and 42nd Street and beyond. It suddenly hit me: they are doing a play of mine here. In New York. Right over there in that building off 42nd Street and 8th Avenue, in the center of the theatre world that has been the goal and the dream of playwrights for generations. My play. Absolute strangers are going to see and hear something I wrote, meet the characters, hear their voices, hear my thoughts. I know the word “awesome” gets overused to the point of meaninglessness, but right now, it’s about the only word that I can think of that describes what I felt when it hit me. And I hope the feeling never goes away.

For the record, it hasn’t.