I’ve asked this one before, but today — especially a year after the inauguration of Barack Obama — it seems appropriate. 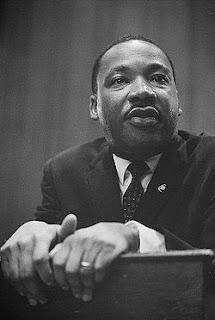 For me, growing up as a white kid in a middle-class suburb in the Midwest in the 1960’s, Dr. King’s legacy would seem to have a minimum impact; after all, what he was fighting for didn’t effect me directly in any way. But my parents always taught me that anyone oppressed in our society was wrong, and that in some way it did effect me. This became much more apparent as I grew up and saw how the nation treated its black citizens; those grainy images on TV and in the paper of water-hoses turned on the Freedom Marchers in Alabama showed me how much hatred could be turned on people who were simply asking for their due in a country that promised it to them. And when I came out as a gay man, I became much more aware of it when I applied the same standards to society in their treatment of gays and lesbians.

So, the question is:

What does Dr. Martin Luther King mean to you? How has his life and his work touched you, if at all?