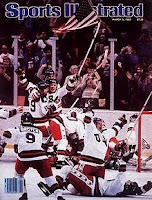 If I’m a little tired this morning it’s because I stayed up late (for me) to watch the hockey game between the USA and Canada at the Olympics last night. I’ll let others discuss the minutiae of the game, but as a veteran hockey-watcher both on TV and a lot of nights at the old Toledo Sports Area, it was a very exciting game both in terms of skill and just plain good playing on both sides.

I’ve got a lot of friends in Canada (hello, Costin, Matt and Michael) who I know were probably disappointed with the outcome, but Team Canada has nothing to be ashamed of, and it’s not like it’s over for them in the Games.

And as every Olympic commentator worth his load of nostalgic gravitas noted, today marks the 30th anniversary of the Miracle on Ice at Lake Placid in 1980 when the USA (with former Toledo Goaldigger Mike Eruzione on the team) beat the Soviet Union at the height of the Cold War. At that time I was living in Evansville, Indiana, teaching high school English, and I’m sure my neighbors in my apartment building were more than a little freaked out by the shouts and yells coming from my place on that afternoon when, indeed, it was the Best Game Ever Played. But last night was no slouch, either.