I don’t think this is what they had in mind. 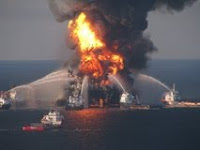 A deepwater oil platform that burned for more than a day after a massive explosion sank into the Gulf of Mexico on Thursday, creating the potential for a major spill as it underscored the slim chances that the 11 workers still missing survived.

The sinking of the Deepwater Horizon, which burned violently until the gulf itself extinguished the fire, could unleash more than 300,000 of gallons of crude into the water every day. The environmental hazards would be greatest if the spill were to reach the Louisiana coast, some 50 miles away.

Crews searched by air and water for the missing workers, hoping they had managed to reach a lifeboat, but one relative said family members have been told it’s unlikely any of the missing survived Tuesday night’s blast. More than 100 workers escaped the explosion and fire; four were critically injured.

My thoughts are with the families of the missing and injured.