David Brooks has seen the future and it looks like the GM Futurama at the 1939 New York Worlds Fair. 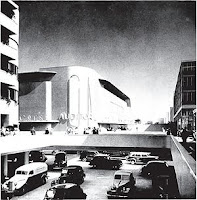 Over the next 40 years, demographers estimate that the U.S. population will surge by an additional 100 million people, to 400 million over all. The population will be enterprising and relatively young. In 2050, only a quarter will be over 60, compared with 31 percent in China and 41 percent in Japan.

In his book, “The Next Hundred Million: America in 2050,” über-geographer Joel Kotkin sketches out how this growth will change the national landscape. Extrapolating from current trends, he describes an archipelago of vibrant suburban town centers, villages and urban cores.

Over the next 40 years, Kotkin argues, urban downtowns will continue their modest (and perpetually overhyped) revival, but the real action will be out in the compact, self-sufficient suburban villages. Many of these places will be in the sunbelt — the drive to move there remains strong — but Kotkin also points to surging low-cost hubs on the Plains, like Fargo, Dubuque, Iowa City, Sioux Falls, and Boise.

Yes, I’m sure it’s always been a secret dream of people in the inner city to spend their golden years in the middle of the prairie with a bunch of white people with guns.

In sum, the U.S. is on the verge of a demographic, economic and social revival, built on its historic strengths. The U.S. has always been good at disruptive change. It’s always excelled at decentralized community-building. It’s always had that moral materialism that creates meaning-rich products. Surely a country with this much going for it is not going to wait around passively and let a rotten political culture drag it down.

When he says the “U.S. has always been good at disruptive change,” I assume that’s a reference to wars, financial upheaval, and such. But that’s a small price to pay for sliced bread and color TV, right?

The problem with the rosy scenario future is that it’s populated by people like us.