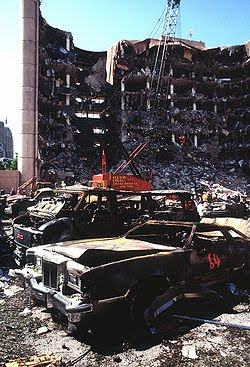 I remember where I was. It’s one of those days when you remember the event.

It was a Wednesday. I was working for my dad’s window company in Harbor Springs, Michigan, and I was at my desk doing a take-off from a set of plans and listening to Interlochen Public Radio when Carl Kasell of NPR broke the news. This was before the internet had reached me — I was still using my Apple IIc computer — and there was no TV available, so it wasn’t until I went home for lunch that I saw what CNN was showing.

That night I drove down to Toledo to meet up with friends to travel the next day to the William Inge Festival in Independence, Kansas. To get there, we had to fly through Tulsa, so when we arrived in Tulsa, the papers were filled with the horrific details of the bombing and the arrest of Timothy McVeigh and Terry Nichols.

But what I remember most was the stunned look on the faces of the people in that part of the country as they absorbed it. One friend who grew up in Oklahoma City and has spent all of her life there said, “We just don’t do things like that here. That’s not us.”

Yes, actually, we do do things like that and it is us. We’ve become comfortable over the last few decades thinking that acts of extremism have to be imported because it’s incomprehensible that any American could do something so calculating and inhumane; it had to be someone who really hated America and all we stand for to become so violently enraged. But we’ve had this sort of hatred, this outburst as long as we’ve been able to walk upright, and it has happened here in America and at our own hands. We have politely called them acts of extremism by lone wolves who are acting out on their own twisted agenda, especially when they hold views we might be sympathetic to, and we have turned acts of extremism and rage into organized efforts and called them the Revolution or the Civil War. But they are all the same: acts of rage when the perpetrators think that there is no other way. A bomb that kills 168 people is no different than a war that kills ten million.

It’s really easy to label terrorism as something foreign that gives us a “them” to fight and ignore the “us” here, especially when we have people enabling the angry and the unhinged for whatever reason they have, be it political power or winning the time slot in the Arbitron rating. But the lesson of Oklahoma City is that we do things like that and we will do things like that in the future. There will be more McVeighs and there will be those who encourage and exploit them. The only recourse we have is to never believe that it can’t happen here.