While on Sean Hannity’s show on Fox the other night, Sarah Palin got a dig in at news coverage of the immigration law in Arizona:

One of the media outlets the other day just, ah, just was killin’ me on this one, Sean, where they had a caption across their screen that said this Arizona law will make it — it will make it illegal to be an illegal immigrant — some bizarre type, a headline like that where it was just this illustration that they just don’t get it.

The caption she referred to was on Fox News. 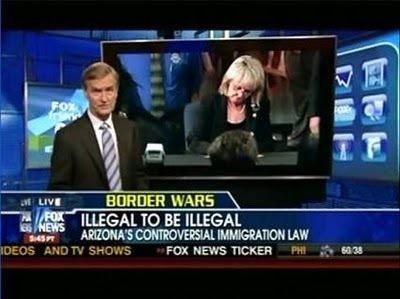 Over to you, Sarah.