J.D. Hayworth, the far-right challenger to John McCain in the Arizona Senate primary, told an audience that the United States never declared war on Germany in World War II.

While speaking last week to a local GOP organization in Phoenix, Hayworth was asked by an attendee about America’s failure to formally declare war in our modern conflicts. Hayworth defended the modern-day authorizations for the use of military force. “But I would also point out, that if we want to be sticklers, the war that Dwight Eisenhower led in Europe against the Third Reich was never declared by the United States Congress,” said Hayworth. “Recall, the Congress passed a war resolution against Japan. Germany declared war on us two days later. We never formally declared war on Hitler’s Germany, and yet we fought the war.”

Declaring that a state of war exists between the Government of Germany and the government and the people of the United States and making provision to prosecute the same.

Whereas the Government of Germany has formally declared war against the government and the people of the United States of America:

Plus, it was in all the papers. 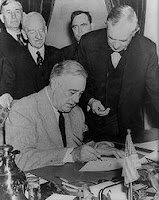 December 11, 1941 — Germany and Italy have announced they are at war with the United States. America immediately responded by declaring war on the two Axis powers.

Three days ago, US President Franklin Roosevelt announced America was at war with Japan, the third Axis power, following the surprise attack on its naval base at Pearl Harbor.

Today Italian dictator, Benito Mussolini, made his declaration first – from the balcony over the Piazza Venezia in Rome – pledging the “powers of the pact of steel” were determined to win.

Then Adolf Hitler made his announcement at the Reichstag in Berlin saying he had tried to avoid direct conflict with the US but, under the Tripartite Agreement signed on 27 September 1940, Germany was obliged to join with Italy to defend its ally Japan.

“After victory has been achieved,” he said. “Germany, Italy and Japan will continue in closest co-operation with a view to establishing a new and just order.”

I’m not sure what scares me more: the level of ignorance displayed by Mr. Hayworth as to a basic fact of history, or that he stands a chance to become a United States Senator.