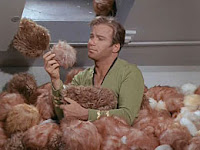 In Canada, the Governor General sweepstakes continue, and momentum is gaining for one long-shot pick: William Shatner.

The decision as to who becomes to the next Governor General, the country’s de facto head of state and representative of the Crown, is made by the Prime Minister, but popular opinion is steaming behind a term for Shatner. More than 45,000 people have joined a Facebook campaign to support the concept.

David Frum, the author of the post and native of Canada, is against it.

I say no to Shatner because he lacks competence. Twittering last week, he wrote that he was unsure as to what the position even implied: “I believe Governor General means you govern the generals. Does that make me part of the army?”

He’s an entertainer, an agent of satire, an action hero, not a potential head of state. He just doesn’t have the required poise to sit quietly through formal ceremonial activities. And he doesn’t have the dignified presence of a William Massey or an Adrienne Clarkson.

Finally, while it might be oh-so delightful to hear Shatner poeticize the government’s annual Speech from the Throne in his trademark style, it would take forever.

Yeah, it would be terrible idea to have an actor as head of state; it would never work. Oh, wait….

Why be such a party-pooper? It sounds like fun, and he would certainly be more entertaining — and probably more persuasive — as a representative of Canada than the current Prime Minister, Stephen Harper, who is deadly seriously dull. And we know that Mr. Shatner has had some experience dealing with foreign powers without violating the Prime Directive most of the time.