Brian wrote me the other day to remind me of a very special event. 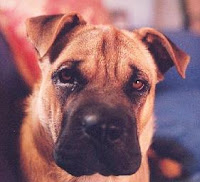 Today is the tenth anniversary of a life altering event. Any ideas? Okay, I’ll make it easy for you. Ten years ago today you and I got in the Pontiac and drove over to Wild Oats, and left with Marty.

Yup. She’s ten plus four months, and has been with me ten years today, and she’s doing great! She’s slowed down a little (so have I), and sleeps more, and more deeply. She long ago abdicated watchdog duties to Walter, who she recognizes has always been much better at it anyway. She figures if there’s something she really needs to get up for, he’ll let her know about it.

Her hearing seems fine, and her eyes are still sharp. We’ll be walking and she’ll stop dead in her tracks and stare. I follow her gaze, wondering what she sees, and sure enough…there’ll be a cat slinking under a car three blocks away. At the dog park she still runs and plays, but is often more content to just flop down and chew on a piece of wood. Most of her exercise there comes when another dog takes her piece of wood away (she’s a wuss). Then she’ll dance around them, bowing and barking, trying to distract them long enough to swoop in and steal it back. It only works about once a year, but that doesn’t stop her from trying anyway.

Since I’ve had her I’ve had three cars and four jobs. But more importantly, because of her I have a slew of great friends, untold hours of great times, and a million laughs. When I got her I had no idea how having her would change my life, and for that I am grateful.

Tonight we celebrated with steak. Undeterred by winds gusting to seventy miles an hour, I moved the grill into the garage. Hey…how often do you have a ten years anniversary, right? She and Walter got plenty of scraps, and after dinner a two mile walk that included dodging part of the roof from the Museum of Natural History’s admin building, which decided to blow off just as we were walking by. Now she’s curled up on the sofa, and I expect the mild snoring will start soon, and tomorrow she’ll wake up slowly and grudgingly, gruff and grumpy as I putter around making coffee and checking the news.

Ten years ago today, I never imagined the doors she’d open for me, the relationships that would develop because of her, and the sheer joy I’d get from simply having her around, snoring on the sofa.

How can anyone NOT have a dog?

Indeed. Marty wins your heart the minute you meet her — how could you not love that face? I wish her many, many more years of love and companionship.