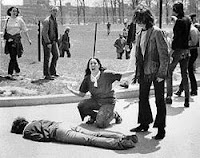 I do remember where I was on May 4, 1970, when I heard about the shootings and the four dead students at Kent State University in Ohio. I was a junior in high school and while I didn’t know any of the kids that were killed by the Ohio National Guard at an anti-war demonstration that got horribly violent, I knew people who did, and I knew people who went there. Even forty years later it still brings back the feeling that just below the surface there was — and still is — a lot of powerful hatred over the war in Vietnam and how we responded to it.

It also reminds me that time has not changed the attitudes borne by people on both sides of an issue, be it a war or healthcare or taxes or civil rights. Crowds can be easily turned into mobs and responses can become violent; voices can invoke the worst of our demons and hurl the accusations of extremism without a thought to who hears them or what their responses may be. And very few of them are held to account.

After the smoke cleared at Kent State but before the true horror and post-traumatic responses were embedded, a lot of people said, in some form or another, “those kids got what they deserved.” That kind of defense mechanism, which is meant to shield the speaker from truly accepting the fact that four lives were lost and countless others were disrupted, paralyzed, or forever damaged. James A. Rhodes, the governor of Ohio at the time, never seemed to grasp the fact that the wounds will never truly heal, and the the war in Vietnam, like all wars, is never over as long as we remember.

That’s not necessarily a bad thing. Remembering the horrors all these years later may, to some degree, stay the hand that holds the rifle the next time.