Frank Rich — If only Arizona were the real problem.

The crowd that wants Latinos to show their papers if there’s a “reasonable suspicion” of illegality is often the same crowd still demanding that the president produce a document proving his own citizenship. Lest there be any doubt of that confluence, Rush Limbaugh hammered the point home after Obama criticized Arizona’s action. “I can understand Obama being touchy on the subject of producing your papers,” he said. “Maybe he’s afraid somebody’s going to ask him for his.” Or, as Glenn Beck chimed in about the president last week: “What has he said that sounds like American?”

To the “Take Back America” right, the illegitimate Obama is Illegal Alien No. 1. It’s no surprise that of the 35 members of the Arizona House who voted for the immigration law (the entire Republican caucus), 31 voted soon after for another new law that would require all presidential candidates to produce birth certificates to qualify for inclusion on the state’s 2012 ballot. With the whole country now watching Arizona, that “birther” bill was abruptly yanked Thursday.

The legislators who voted for both it and the immigration law were exclusively Republicans, but what happened in the Arizona G.O.P. is not staying in Arizona. Officials in at least 10 other states are now teeing up their own new immigration legislation. They are doing so even in un-Arizonan places like Ohio, Missouri, Maryland and Nebraska, none of them on the Department of Homeland Security’s 2009 list of the 10 states that contain three-quarters of America’s illegal immigrant population.

The angry right and its apologists also keep insisting that race has nothing to do with their political passions. Thus Sarah Palin explained that it’s Obama and the “lamestream media” that are responsible for “perpetuating this myth that racial profiling is a part” of Arizona’s law. So how does that profiling work without race or ethnicity, exactly? Brian Bilbray, a Republican Congressman from California and another supporter of the law, rode to the rescue by suggesting “they will look at the kind of dress you wear.” Wise Latinas better start shopping at Talbots!

In this Alice in Wonderland inversion of reality, it’s politically incorrect to entertain a reasonable suspicion that race may be at least a factor in what drives an action like the Arizona immigration law. Any racism in America, it turns out, is directed at whites. Beck called Obama a “racist.” Newt Gingrich called Sonia Sotomayor a “Latina woman racist.” When Obama put up a routine YouTube video calling for the Democratic base to mobilize last week — which he defined as “young people, African-Americans, Latinos and women” — the Republican National Committee attacked him for playing the race card. Presumably the best defense is a good offense when you’re a party boasting an all-white membership in both the House and the Senate and represented by governors who omit slavery from their proclamations of Confederate History Month.

In a development that can only be described as startling, the G.O.P.’s one visible black leader, the party chairman Michael Steele, went off message when appearing at DePaul University on April 20. He conceded that African-Americans “really don’t have a reason” to vote Republican, citing his party’s pursuit of a race-baiting “Southern strategy” since the Nixon-Agnew era. For this he was attacked by conservatives who denied there had ever been such a strategy. That bit of historical revisionism would require erasing, for starters, Strom Thurmond and Jesse Helms, not to mention the Willie Horton campaign that helped to propel Bush 41 into the White House in 1988.

The rage of 2010 is far more incendiary than anything that went down in 1988, and it will soon leap from illegal immigration to other issues in other states. Boycott the Diamondbacks and Phoenix’s convention hotels if you want to punish Arizona, but don’t for a second believe that it will stop the fire next time.

Oops — Carl Hiaasen on the oil spill and Florida tourism.

It turns out that oil is gushing from that blown-out rig off the Louisiana coast at a flow of at least 5,000 barrels a day, five times more than BP first estimated.

Oh, and if you’re keeping count, by Friday there were three leaks — not two — in the mile-long pipe that connected the platform to the wellhead.

The slick is larger than Rhode Island, and a shift of wind is pushing it into the wetlands of bayou country, imperiling birds, marine life and commercial fishing. Tourist beaches in Alabama and northwest Florida are also at risk.

Barely a month ago, President Obama announced plans to expand offshore oil operations in the eastern Gulf of Mexico and along the Atlantic coast as far south as central Florida.

It won’t bring down the price of gasoline one penny at the pump, and it won’t yield enough crude oil to light up America for even a year — but, hey, what harm could it do?

The oil companies know how to find oil, and they sure know how to drill. The only part of the underwater operation that they haven’t really nailed down is how to clean up their spills.

Soon after the Deepwater Horizon rig caught fire and sank, killing 11 workers, BP sent remote-controlled submarines to shut a master valve near the source of the outflow. It didn’t work.

Plan B is to dig a relief well in the hopes of intercepting the oil before it reaches the fractured pipe. Plan C is to plug up the spewing hole with mud, concrete or a heavy liquid.

At a depth of 5,000 feet, either project will take weeks or months, during which time the oil would continue leaking.

Meanwhile, as this column is being written, BP is lighting parts of the Gulf of Mexico on fire, to burn off some of the slick. So much for high-tech.

The company is also assembling an extremely large dome — I swear — that engineers could lower to the ocean floor and place over the leak in an attempt to capture the oil.

Maybe when they’re done, they can give it to Wile E. Coyote so he can use it to trap the roadrunner. 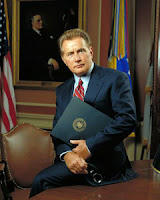 In the movies, a president confronted with a massive oil spill would dispense with politics, go after his own crooked industry contributors for paying off regulators and ban future offshore drilling, cost be damned. He might even fly down to personally shut off the leak.

Four years later, a fellow Democrat is in the real one.

It’s a lot easier to be a movie president, of course, at least if you are the hero of the piece. No matter what the crisis, no matter what the odds, you can be reasonably sure you will dispatch the biggest threat confronting the nation, and within two hours. No cloture vote needed.

For decades, Hollywood presidents were strictly idealized versions, wise figures leading the country through dangerous times like Henry Fonda in “Fail Safe.” By Bill Clinton’s presidency, a darker alternative emerged — the adulterous president in “Absolute Power,” for example, or the conspiring president in “Clear and Present Danger.”

Now they come in clear packages. “Our movie presidents are either Kennedy or Nixon,” said Rod Lurie, who wrote and directed “The Contender.” “They’re either villains like in ‘Absolute Power’ or they’re heroic figures.” And if heroic, they are all knowing, overriding cynical aides and outthinking opponents. “Every filmmaker who makes a movie about a president automatically wants to give the audience the president they’d like to have.”

Mr. Lurie succeeded in giving Mr. Obama the president he would like to have. While moviegoers in unscientific polls routinely vote Harrison Ford’s terrorist-fighting James Marshall their favorite fictional president, Mr. Obama says he prefers Jeff Bridges’s crafty and somewhat cynical President Jackson Evans in “The Contender.” With his vice president dead, Mr. Bridges’s president nominates the first woman to hold the office, only to see her caught up in a sex scandal.

Mr. Obama expressed his admiration for Mr. Bridges’s character to Mr. Lurie when they met for the first time at the home of Ari Emanuel, the Hollywood agent and brother of Rahm Emanuel, now the White House chief of staff. Mr. Lurie said Mr. Obama, then a senator, asked for speeches like those of the movie president.

Mr. Lurie, who later made “Commander in Chief,” a short-lived television series starring Geena Davis as a vice president who succeeds to the presidency, said he told Mr. Obama the difference was the Hollywood music, which can make any speech sound stirring. “I said, ‘Senator, you don’t need me, you need my composer,’ ” he said.

So finally, back to our issues. What about climate change? “A Hollywood president wouldn’t take on climate change,” Mr. Lurie said, “because nobody would come and see it.”