Another car brand is orphaned. 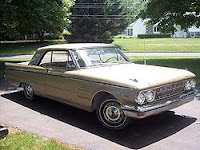 Ford Motor announced Wednesday that it would discontinue selling Mercury models this fall, ending a 71-year-old brand that once stood for innovation and speed but that became a “me, too” division.

Mark Fields, the president of Ford’s Americas region, said Ford directors approved the step on Wednesday. He said the company would focus its resources on its core Ford division as well as Lincoln.

Like a lot of lines that have gone in recent years, Mercury had become basically a badge-engineered version of cars already in production; it’s been a very long time since they had a model that wasn’t a Ford with a different nameplate and a few other options. Still, I can’t help feeling a little nostalgic about some memories of a car like the one in the picture — a 1963 Mercury Meteor that my former partner bought in mint condition off a used car lot in Boulder in 1986. I got to drive it across country in 1991, from Longmont, Colorado, to Petoskey, Michigan in the middle of summer. No A/C, no cruise control, and definitely not a turnpike cruiser. But it was a good car and I wish it was still around.