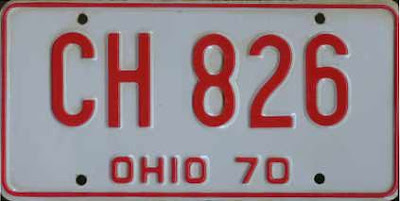 The colors on the 1970 Ohio plate honored The Ohio State University’s 100th anniversary that year. The grey nicely matched the silver of the Mustang.

In those days you could go to the deputy registrar’s office and reserve a plate number at no extra charge, and the following year(s) they would hold it for you. Our family had three cars, so the lowest series of numbers we could get were three numbers followed by a letter marking the county. My plate was 783 N.

In April 1970, I acquired a silver 1957 Chevrolet Two Ten station wagon. It had belonged to the grandmother of a friend, but she didn’t want it any more, so it sat behind my friend’s garage. His dad said if I could get it started, I could have it, so armed with jumper cables and a bicycle pump to re-inflate the tires, I got it running and down to my local mechanic who gave it a once-over, replaced a couple of brake lines, and I had a car. (Remember, I shared the Mustang with my siblings, and that spring my brother had it at college.) The Chevy wagon had a huge V-8, a two-speed Power Glide automatic, it was rusted through in the rear wheel wells, no seat belts, and the factory-installed air conditioning was dead, but the radio worked and it ran. Back in those days, I named my cars. I christened the Chevy the Silver Meteor for the train that runs along the eastern seaboard and mentioned in a book that I was reading at the time.

That summer I drove it from Perrysburg all the way to Plainfield, Vermont, where I spent a couple of months working on a dairy farm. It made it there and back again without any trouble. The following winter, though, it got into a fender-bender with our garage and we foisted it off onto another family who promptly parked it in their backyard, and there it rusted away.