Bryan at Why Now? used to have a weekly feature called “Passing the Plate” where he went through all the specialty license plates offered by the state of Florida. I remembered that when I went through a box in the garage that has a collection of every license plate I’ve ever owned, plus some others of interest. So I’m following Bryan’s inspiration and starting a new feature here where I’ll put up a picture of every plate I’ve ever had going back to my first car in 1969. I won’t be putting up the actual plate, though; my scanner doesn’t doesn’t do a good job of reproducing plates, especially the reflectorized ones. So via the excellent work of David Nicholson at 15q.net, I’ve come up with a collection of plates that are from the same years but with different numbers. I’ll also have a little history on the car(s) that wore the tag and perhaps some memories of the places I took the car and the plate. By the way, feel free to share your own memories, and if you have pictures of your own plates that you’d like to share, send them along.

Here’s the first one. 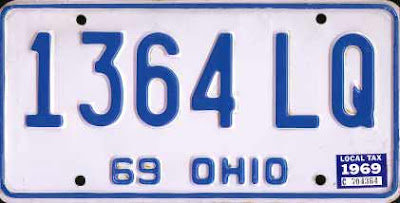 In April 1969 my parents bought a 1965 Ford Mustang 2+2 from Brondes Ford in Toledo. It was supposed to be shared between my sister and my brother, but they were both off at college and I was the one who chose it, so… it was my car, basically. 1969 was the summer of the moon landing, Chappaquiddick, and Woodstock.

The number is not exactly like the series we had in Wood County; it had five numbers followed by a single letter and we didn’t have the local tax. In those days, Ohio plates were changed every year between March 15 and April 15, and you went to the local deputy registrar to do it, which in our case was a local appliance store. I have memories of standing in line with my dad between the rows of Norge refrigerators and Whirlpool washing machines as we waited our turn to get our new plates.

Being a deputy registrar in the county was a patronage appointment, so when John Gilligan, a Democrat, was elected governor in 1970, the license plate business moved across the street to the TV/stereo shop that was owned by a Democrat.